What Does Placebo Effect Mean?

The placebo effect is a remarkable physiological and psychological phenomenon, in which a person reacts to a placebo (fake source of stimuli, meant to deceive the receiver), as if the stimulus were true. In this PsycholoGenie article, we shall learn how the placebo effect is, how it works, and what its effects on people are. 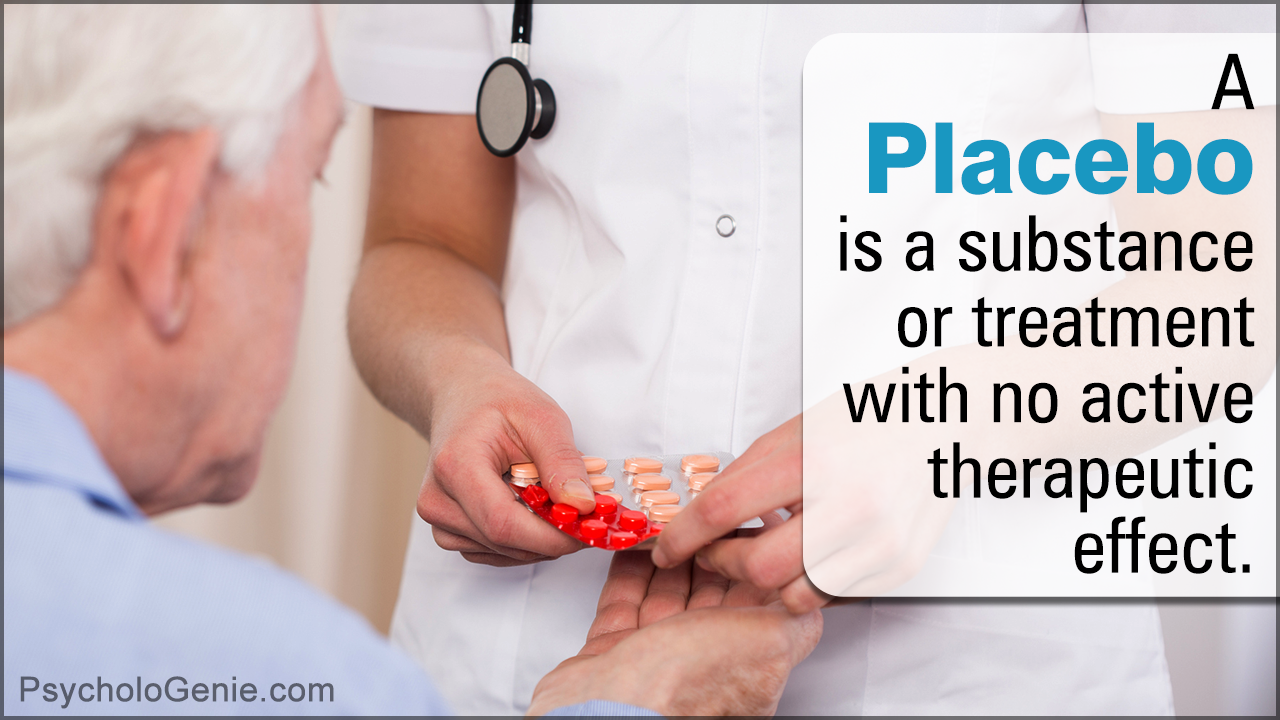 The placebo effect is a remarkable physiological and psychological phenomenon, in which a person reacts to a placebo (fake source of stimuli, meant to deceive the receiver), as if the stimulus were true. In this PsycholoGenie article, we shall learn how the placebo effect is, how it works, and what its effects on people are.

Did You Know?
Many researchers use placebo trials during drug testing, to tell if the medication has any effect over and above that which occurs, when patients take a fake pill.

A placebo is a substance with no known medical effect on the human body. Common examples of placebos are sugar pills, sterile water, or saltwater solutions. The placebo effect can be defined as ‘ a reaction to a placebo manifested by a lessening of symptoms or the production of the anticipated effects’.

For many years, scientists considered the placebo effect to be the result of people’s overactive imaginations. However, recent research has found that this phenomenon is not just a figment of imagination, but an active action of the brain, and suggests that the thoughts of a person physically interact with the brain. However, what exactly is the placebo effect and how does it work? To answer these questions it is best to look at a few examples.

Example 1: Sometimes, patients with certain ailments show signs of recovery after having a placebo medication if they are unaware that the medicine is a fake. The placebo does not necessarily have to be a drug, it could also be in the form of special diets, exercise regimens, physical therapy, etc.

Example 2: People will display signs of drunkenness, such as slurred speech, unsteady motor skills, and some people might even pass out after drinking large amounts of non-alcoholic beer if they are deceived into believing it is regular beer. While non-alcoholic beer does have a tiny amount of alcohol, it is not actually enough to cause such excessive reactions.

How Does the Placebo Effect Work

So why do the above people show such reactions, when they logically shouldn’t? What makes the placebo effect work? Imagine that you are not feeling well, so you visit the doctor. After your examination, the doctor will usually scribble out a prescription for you. Now, you do not think about what the medicine actually contains as long as you feel better after taking it, because you trust the doctor’s judgment. After you get well again, what if you find out that the medicine has not been proven scientifically to treat your ailment? Yet, you got better, because you expected to get better. This is the gist of a placebo effect.

In the first example, it is the patient’s belief in the treatment and his/her expectation of recovery from illness which helps him/her to show signs of getting better. The mind’s expectations releases endorphins which can act as painkillers and reduce the symptoms of the conditions. Similarly, the individuals in the second example believed they had drunk real beer, making them show various signs of drunkenness. However, science is still not completely sure as to exactly why this phenomenon takes place. It is largely thought that the brain exerts control over the somatic processes of the body, including diseases. This enables mere expectations to produce effects equal to that of the real thing.

Study No.1: One of the most famous cases on the work of placebo effects was done on a cancer patient in 1957, where a new drug by the name of Krebiozen was hailed as a miracle cure for cancer. The drug was administered to a patient who had an advanced stage of cancer. Due to the medication, the tumors in the patient’s body melted away, and he returned to an almost normal life. However, soon, the press released statements that the drug was actually ineffective in curing cancer. After reading these articles, the patient had a relapse, and his tumors grew back. In desperation, the doctor administered a dose of plain distilled water to the patient, telling him that it was a new and improved version of Krebiozen. The patient recovered completely after this placebo treatment. However, when the press released another scientifically backed statement about the complete ineffectiveness of the drug, the patient succumbed a few days later.

Study No.2: A group of people were given a hot piece of metal to hold, and each person was then either given an injection of morphine or a placebo. In both cases, the subjects reported a decrease in pain after receiving the injection.

Study No.3: A study group was led to believe that they were drinking vodka (in reality a mix of tonic water and lime). The people showed that their judgment had been suppressed, and their IQ levels were seen to have gone down. This research proved that even placebo drinking could be harmful for people who are driving, by increasing the chance of accidents.

Study No.4: Some studies have shown that the placebo effect works even when the person is aware of the deception. In this study, the test subjects were eventually told that they were receiving fake drugs. In spite of this, the positive effects continued and many people in the group chose to continue with the fake treatment.

Study No.5: In another study, one of two groups of asthma patients were given medication infected with hookworm, while the others were given placebos. However, both groups showed a marked decrease in the asthma symptoms.

Study No.6: Placebo studies on surgeries have shown that fake surgeries, where the surgeons only cut open the patient and stitched them back up, are equally effective as a real surgery, resulting in fixed limbs that did not pain anymore.

Study No.7: In a clinical trial for a K9 drug for epileptic dogs, half of them were given a placebo drug, while the other half were given the real thing. Despite the fact that animals do not have any expectations from medications, the dogs that received the placebo drug showed great signs of improvement. This shows that the placebo effect works not just on man, but animals as well.

With such benefits of the placebo effect, it might seem that this is a miracle cure for almost anything. However, there is a negative effect too. A person who does not believe in the treatment being offered to him will show signs of worsening health, by the increase in various symptoms, even if he/she is given an inert medication. Such an effect is called nocebo. This effect occurs mainly due to a negative attitude towards how effective a particular substance is, or the belief that the person will not get better.

In Italy, a study was conducted, where lactose intolerant people, were given lactose placebos. Due to nocebo, around 50% of the people in the study showed signs of lactose intolerance and symptoms of gastrointestinal distress. Another person ate a large quantity of placebo pills in a suicide attempt, during the testing of antidepressant drugs. Despite the inert nature of the pills, the person’s blood pressure fell to dangerous levels.

While the placebo effect actually takes place in a person’s subconscious mind, the phenomenon can be observed if one is closely looking for such signs. It has been seen that, in recent years, the advancements in medicine has given us greater belief in modern treatments, which have in turn greatly expanded the role of placebos in the medical industry. Receiving a treatment and expecting it to work has shown to do wonders. So think positive and stay strong.