Talk Therapy Vs. Drug Therapy for Depression: Know Which One to Choose

Can there really be a medical remedy for a troubled mind? What are the merits of drug therapy over talk therapy to treat depression and vice-versa? To get a comparative idea of the two, read this post.

Home / Uncategorized / Talk Therapy Vs. Drug Therapy for Depression: Know Which One to Choose 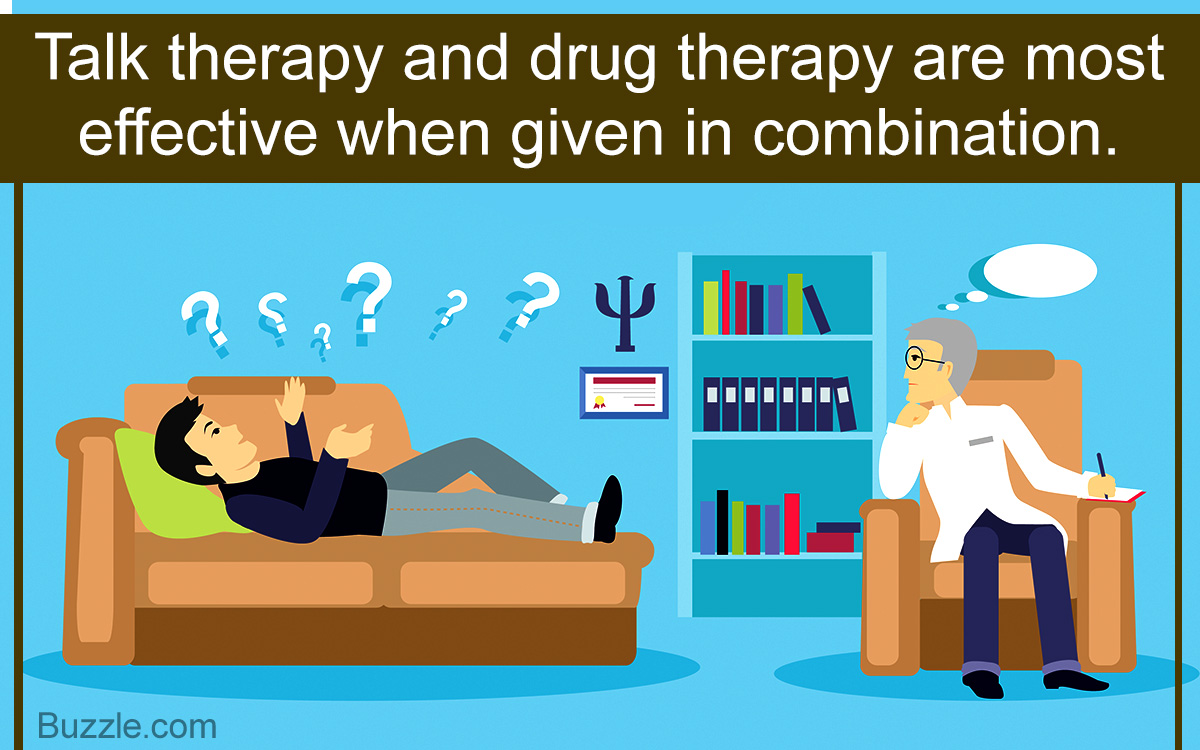 Can there really be a medical remedy for a troubled mind? What are the merits of drug therapy over talk therapy to treat depression and vice-versa? To get a comparative idea of the two, read this post.

Do you know what it feels like to enter an abyss, never to return from? Have you ever been so low in life that being anywhere and anyhow than where and how you were, would seem a blessing? We all hit miserable lows in our lives at some point of time. Bad grades, being socially outcast, being surrounded by hypocrites, going through a break-up, cheating partners, difficult superiors, being imbibed … all have the power to bring you down so fast and so hard, you may wonder if you can ever get up and get back to being yourself again. Depression is one of the worst things that can hit anyone at any point of time in life. And as Kate Winslet’s character ‘Iris’ says in the movie The Holiday, “it doesn’t matter how many new haircuts you get, or gyms you join, or how many glasses of chardonnay you drink with your girlfriends… you still go to bed every night going over every detail and wonder what you did wrong.” (- Kate Winslet as ‘Iris’, The Holiday)

Depression has indeed plagued the modern man more and more intensely than it did before. And as old as the condition itself, there have been two schools of thought regarding how depression should be treated – clinically, using drugs and medication; or psychologically, using counseling and what is commonly called talk-therapy. There is no one solution to depression. Drugs work for some people, counseling works for some, while both may be required to help few others. in some unfortunate cases, both may not have the desired effect and may fall short of helping someone out of his/her misery. Drug therapy and talk therapy both have their own pros and cons. They both have their benefits and shortcomings. Presented below is a comparative account of the two forms of therapies to treat depression.

Approach: Depression has no defined course, no set pathology. You cannot ‘see’ depression – it is abstract. Depression is a condition of the mind. Hence it is best to deal at it at that very level – the mind. As I said in one of my previous articles, I believe there is no problem in this world that cannot be talked out. The key is to find the right kind of person to talk to. By ‘the right person’, I mean someone who will hear you out, and give you compassionate yet practical and firm advice. Someone who will ‘talk you out’ of your apathy. Many surveys conducted by several researchers and professionals all across the world indicate that one of the major causes of depression is lack of communication. The depressed individual feels left out, estranged, lonely, uncared for, like no one is bothered about him. The condition of a depressed individual is such that once such a thought enters the mind, it is almost impossible to make it leave. The mind of the individual becomes ‘set’ on the thought. The only way out here, is to convince the person that it isn’t really so; that he is in fact loved, cared for, valued, cherished.

Benefits: There are several benefits of talk therapy; the most important one being that you actually get the depressed person talking about what his/her problem is. It is any day better to hear from the horse’s mouth rather than to do guess work. Talk therapy is more personalized. Apart from that, the psychological impact of depression counseling is tremendous, because the depressed individual is actually given the chance to express him/herself and is also compelled to introspect. Besides, it always feels nice to know someone is actually taking an interest in your problems, an actual person. Talk therapy gives the moral support that depressed individuals are rather desperately looking for.

Flip-side: Sometimes talking is not enough. A person who is depressed is in a rather volatile state of mind; he/she may not be in a position to respond or even listen to what a counselor has to say to him/her. At the same time, some individuals develop a block against professional counselors and do not want to talk to them. They think of psychiatrists as preachy people. Talk therapy may well fail in such cases.

Approach:There are certain people in the world who are tend to be affected deeper than others by a certain incident. Say for example, two students both attending the same course in the same college or university get an ‘F’ grade for an assignment. One of the students may take it in the stride – “Oh well, s*#@ happens! It’s okay. No big deal. I goofed up, but I will get back and do better.” The other student, however, may go into depression – “Maybe I do not have it in me to become a (NAME-OF-PROFESSION); maybe I should just quit. I am just not intelligent enough. I am not strong enough. Look at her. She got an ‘F’ too. But she didn’t lose confidence/control. And look at me! I am just useless.” Why only the second person felt that? Why did the first one not get as depressed? It is because some people are genetically pre-disposed to certain conditions; just like they may be predisposed to developing diabetes or cancer, they may be predisposed to depression. Drug therapy tackles depression at this level – at the level of physiology, at the level of genes.

Benefits: Drug therapy is like taking the bull by its horns. One of the neurotransmitters produced in the body, serotonin, affects our mood; when released in the body, it lifts your spirits and gives you the ‘feel-good’ feeling. However, the amount of serotonin produced in the body is genetically controlled. Less than normal serotonin levels can predispose you to feeling depressed. Drugs given in drug therapy tackle with this condition. Drug therapy tackles stress, anxiety, insomnia, loss of appetite and other such symptoms or causes of depression – for there cannot be made a very clear distinction between the two.

Flip-side: Drugs are something that a person can at will decline or increase the intake of; in the state of mind that depressed people are in, this can lead to becoming addicted to the drugs prescribed. At the same time drugs are a rather impersonal way of dealing with a problem like depression. This may cause the drugs to have only a temporary effect on the individual and may cause him/her to relapse into depression.

In summary I would like to say that depression is a condition of the mind that manifests on the body. Hence there is no one solution to the problem. Talk therapy and drug therapy are both equally important and are most effective when given in combination. Finally, will power is also very important. Next time you feel low, remember that “This too shall pass…”