Know the Right Difference Between Galatea and Pygmalion Effect

The Galatea and Pygmalion effects are the two most important self-fulfilling prophecy theories. However, there lies a fundamental difference between them. Here are the subtle differences between the two. 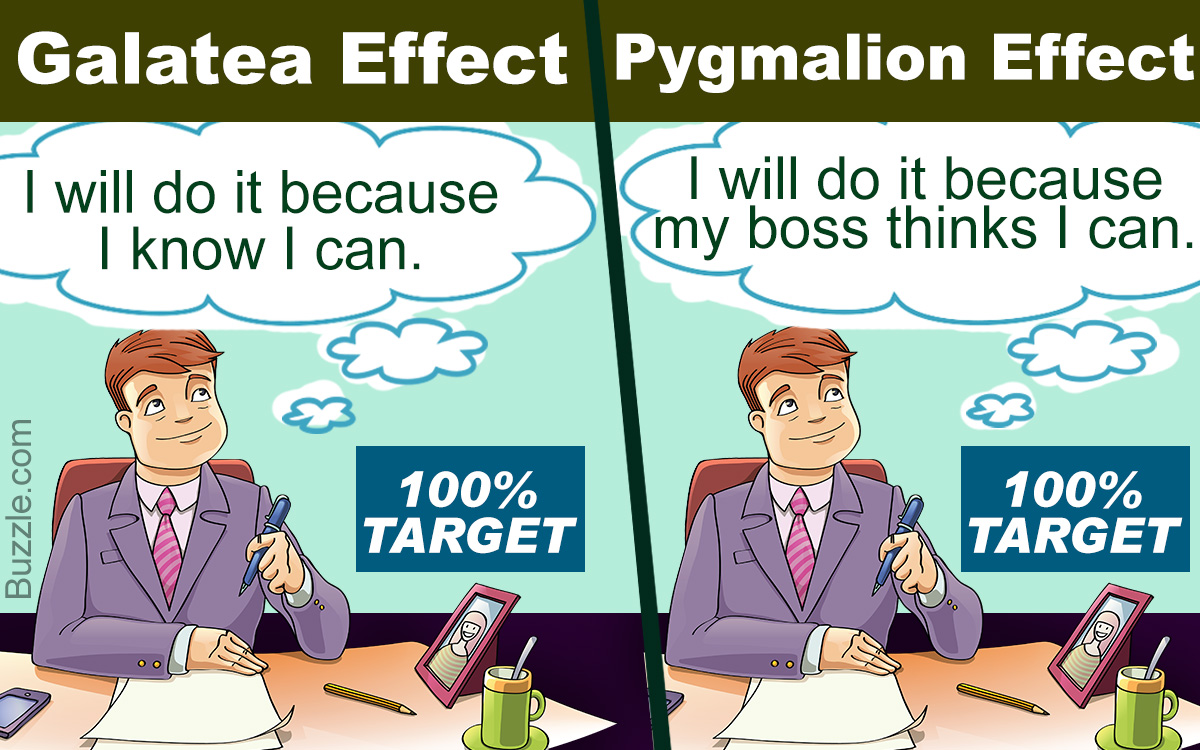 The Galatea and Pygmalion effects are the two most important self-fulfilling prophecy theories. However, there lies a fundamental difference between them. Here are the subtle differences between the two.

“How we believe the world is and what we honestly think it can become have powerful effects on how things will turn out.” – James Rhem
(summarizing the Pygmalion effect in his own words)

In Greek mythology, the name “Galatea” is lent to a statue that is carved of ivory by Pygmalion of Cyprus. Also, Polyphemus’ object of desire in Theocritus’ Idylls VI and XI is named Galatea, and again it has been associated with him in the myth of Acis and Galatea in Ovid’s Metamorphoses. Though there is an association of the name with Pygmalion’s statue, the connection sprang with a post-classical writer.

The Galatea effect is a phenomenon where people’s own opinions about their ability and self-worth influence their performance. The Galatea effect is self-driven. It is that part of one’s motivation that depends on self-expectations and self-worth. If an employee thinks that he can perform well, chances are that he will do well. If, in that situation, he receives positive encouragement from his superiors, it will only boost his confidence and will do wonders to his performance.

The Pygmalion, or Rosenthal effect refers to the phenomenon in which the higher the expectations placed on people — often students, employees, children etc., the better is their execution of work. The Pygmalion effect is a form of self-fulfilling divination. It argues that by setting higher expectations for people (who come under a leader), the leader can motivate them to perform better. It was originally studied in context with a teacher’s expectations of students. It was observed that the students, who were expected to do well did perform well, while the ones who weren’t expected to perform well, did not.

As is told in Greek mythology, the effect gets its name after Pygmalion, a Cypriot sculptor, who fell in love with a female statue that was carved by him. This effect, as applied to the corporate world, was first described by J. Sterling Livingston in an article in the Harvard Business Review in 1988. “The way managers treat their subordinates is subtly influenced by what they expect of them,” — said Livingston in his article. One can summarize the Pygmalion effect as follows:

⇨ Every manager, or supervisor has certain expectations for his subordinates.
⇨ They convey their expectations to them consciously and unconsciously.
⇨ The subordinates get the message of what is expected of them.
⇨ They strive to perform and live up to the expectations of their manager.

Both the effects play an important role in increasing the productivity and personal development of each individual.

Most preferably, people should be driven by their faith in their abilities (the Galatea effect), but the Pygamlion effect is, in its own way, a useful ally in motivating people to give their best. It may not appeal to everyone, but can be considered while coaching or leading people.