What Does it Mean When You Dream About Tornadoes?

Been dreaming of deadly and destructive tornadoes lately? Every dream has a certain interpretation. This PsycholoGenie post explains what it might mean when you dream about tornadoes.

Home / Uncategorized / What Does it Mean When You Dream About Tornadoes? 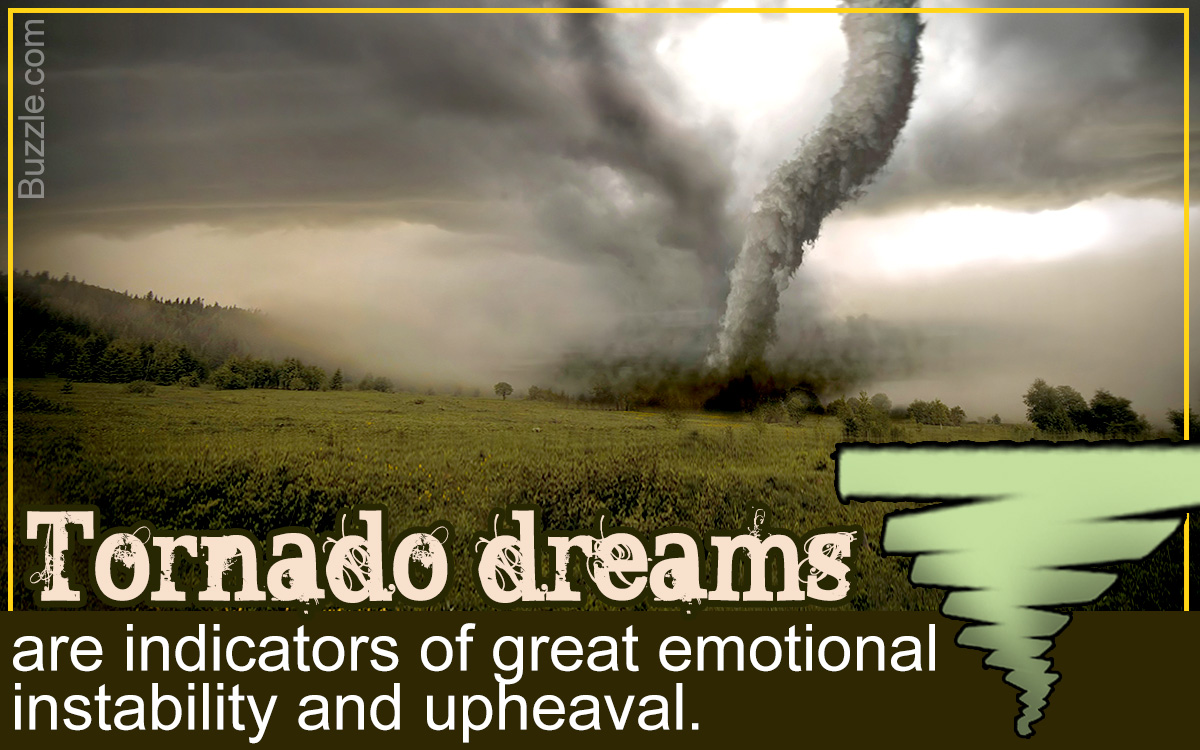 Been dreaming of deadly and destructive tornadoes lately? Every dream has a certain interpretation. This PsycholoGenie post explains what it might mean when you dream about tornadoes.

In some cases, tornado dreams might actually be advantageous. They can help the dreamer think about the waking life from a new perspective and may help solve some seemingly difficult problems.

Dreaming is a universal phenomenon; all human beings – male and female – and also, some animals, dream at some point or the other in their lives. Sometimes, dreams are very pleasant and peaceful, at times they can be very frightening and unpleasant. People have been attempting to interpret the meaning of dreams since antiquity. Prior to the rise of scientific thought, dreams were often associated with higher supernatural powers. They essentially signified the benevolence or wrath of gods, demons, and spirits. But, with researches in dream psychology, this psychic phenomenon came to be interpreted in logical sense. People all across the world have several dreams, and many of them are based, more or less on similar themes – falling from a height, running away from danger, being trapped in a dark room, and so on. According to dream experts, the same dream may have different meanings depending on who is dreaming and under what circumstances.

Natural phenomenon is one of the most common themes on which people’s dreams are usually based. These may include anything from storms to floods to whirlwinds and tornadoes. Dreams about tornadoes, though a little uncommon, do occur and may signify different meanings depending on the situation in which a tornado is witnessed in the dream.

If you reside in a region that experiences tornadoes every year, dreaming of this natural phenomenon might not signify anything much. Moreover, if you have been a victim of a tornado in the past, a tornado might still be a tornado, only that it may signify your fears with respect to the natural phenomenon. But, if one dreams of a tornado without ever having experienced it, it might have some deeper implications. According to dream psychologists, tornadoes (and other similar natural disasters) are indicators of great emotional instability and upheaval. A tornado represents air in its most annihilating capacity, and air, as one of the five fundamental elements of life, represents the realm of thought. Following might be some of the possible interpretations if one dreams of tornadoes:

Seeing a Tornado From a Distance

If one sees a tornado on a sea or on a landscape from a distance, it essentially signifies that the dreamer is confused and, of late, is unable to keep his/her cool. This may result from several waking life situations such as an unstable relationship or differences with colleagues.

Seeing a tornado causing havoc from a distance might indicate that there is a lot of emotional turmoil going on within the dreamer’s mind, and that his/her insecurities and fears are taking a toll on him/her.

Having a dream that a person is going towards a tornado signifies, according to dream experts, that the dreamer is likely to land into some kind of major problem or trouble in the near future. Dream psychologists say that such dreams, wherein the dreamer sees himself/herself approaching a certain disastrous phenomenon, are more often than not, prophetic in nature, and are extremely rare.

Being Caught in a Tornado

If a dreamer sees himself/herself inside a tornado, it essentially means that there are certain things in his/her waking life, which are taking a toll of his/her mental balance. The dreamer is almost completely overwhelmed by certain things, owing to which he/she is losing his/her ground. According to dream experts, one should indulge in meditation in order to regain mental balance and peace of mind. Such dreams would then cease forever.

Seeing More than One Tornado

Dreaming of more than one tornado at the same time is rare, according to dream analysts. However, such dreams may symbolize the various aggressive and dominant people the dreamer may be acquainted with. Seek out ways to deal with such people, and you may be able to get rid of such disturbing dreams.

It has been suggested by dream psychologists that dreams about tornadoes almost always tend to follow some really significant event in the dreamer’s waking life, wherein he/she has experienced some sort of emotional upheaval. Sometimes, such dreams also tend to change the course of one’s waking life. It should be noted that though a tornado is a destructive force that can tear apart anything in minutes, this clearance also makes way for creation of new (and better) things. So, dreaming of tornadoes need not always mean disaster.