The Concept of Naive Realism Explained With Everyday Examples

Naive realism is a part of the study of perspectives, and states that our senses have the ability to see things as they are, physically. Psychologically, it states that we see the world through our perspective, and we have a correct representation in our mind. 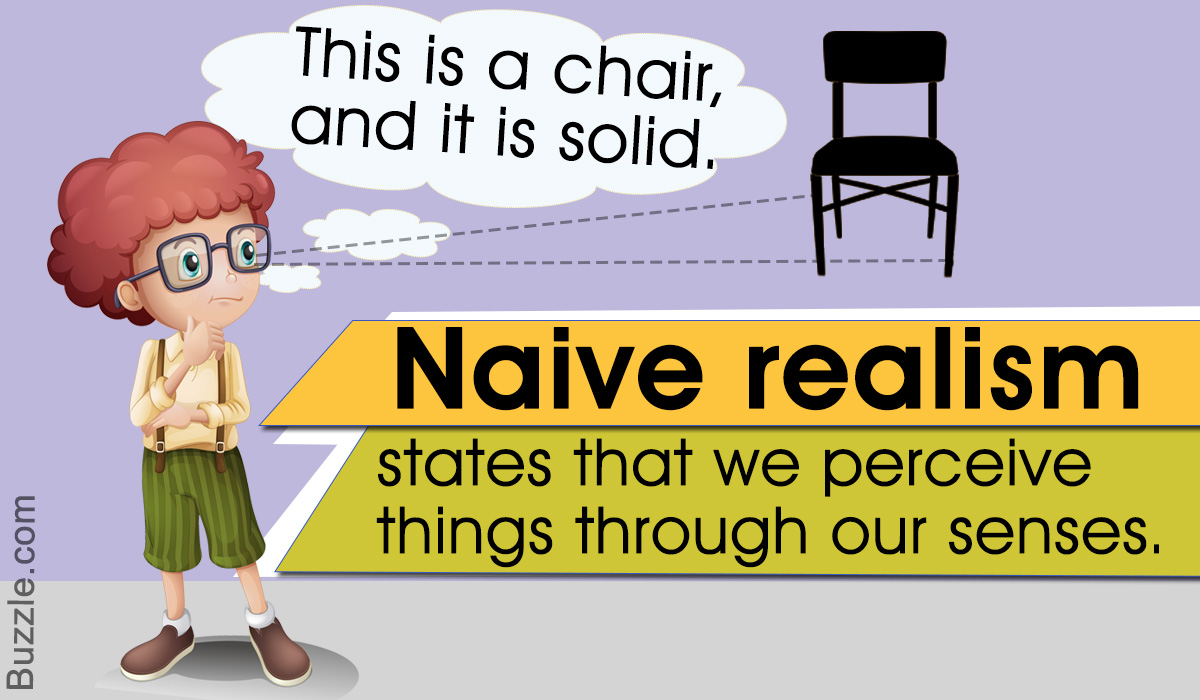 Naive realism is a part of the study of perspectives, and states that our senses have the ability to see things as they are, physically. Psychologically, it states that we see the world through our perspective, and we have a correct representation in our mind.

“The philosophical point of view of the average man – if that term may be applied to his naive realism – has a claim to the highest consideration.”
―Alejandro Moreno

Do we see things as they are, or are things as naive as they appear to be? According to naive realism, the answer is yes. It states that our senses will perceive things as they are. Suppose I see a bottle on the table. The bottle is solid, and it is green in color. My senses describe and create a mental impression of that object exactly the way it is. However, in the fields of anthropology and psychology, this term has a much deeper meaning. In short, the definition of naive realism is the ability to perceive things through our senses, as they are.

► You’re a fan of a particular rock band. You perceive them as the best, as your ears enjoys their music. However, your friend does not agree to it. His perception is different than yours. However, naive realism suggests that all observers are unbiased, and other persons also interpret and perceive things ‘as we do it’. Some fanatics will argue that only what they perceive is correct.

► The Wall Street Game/Community Game Experiment: An experiment was conducted on the students of Stanford University. The game of ‘Prisoner’s Dilemma’ was applied in this case. Students were asked to elect those candidates that were most likely to cooperate and non-cooperate, respectively. However, when the game was explained to the candidates, along with the pay-off matrix, it was alternately named ‘The Wall Street Game’ and ‘Community Game’, respectively. The results were surprising.

Note: The Prisoner’s Dilemma is a byproduct of Game Theory.

► Suppose, A, B, C, and D are contesting for elections. ‘A’ feels that he is the best candidate suitable for the post due to his qualifications and other attributes. He feels that any rational voter will go with him due to his past clean record. Nevertheless, he feels that those who do not choose to vote for him are probably ignorant, or simply biased with others due to various parameters that are best known to them. Thus, ‘A’ is a victim of naive realism. He simply stipulates that he is the best candidate, without analyzing the credentials of the other candidates.

► In America: The Western part of the world has a general overtly superiority complex about themselves. Sometimes, they might perceive the Eastern parts to be underdeveloped, uncivilized, and economically downtrodden. A general perception is also sometimes exhibited in their movies, that are based on prejudices.

► Different cultures have different styles of greetings, table manners, conventions, etc. It can mean different things. In the overtly traditional countries, the freedom given to youngsters in the Western countries, especially women, can serve as a cultural shock. However, they forget the fact that all cultures are a product of man-made beliefs and faith systems, Hence, there are bound to be differences. A symbol of status can be different in different nations. In India, gold is considered as a very precious metal, and a symbol of status in society. However, it is not merely looked as a financial asset, and many times tends to carry oodles of sentimental value, and something that has to be sold only as a last resort.

► The world is as we see it, and how it appears through our perspective. It is a copy of it, and we often fail to realize that we’re biased towards it. We tend to take things at face value. When we see that others deny our perspective, we tend to become defensive, simply because we perceive the world in that way. We often are overtly boastful of our cultures, and make a conclusion that other cultures are not good enough like ours. We might also conclude that if the other person does not agree with us, he/she is wrong. Due to our prejudices, we often make a conclusion that:

This is one of the most popular argument against naive realism. It states that our senses can envision things differently when influenced by various other factors, when in reality, there is no change in the physical attribute of that thing. For example, in case of a stick submerged in water, an illusion is created to the eye that the stick is bent, when in fact it is not. Thus, the way our senses perceive things is not necessarily how things they are. Similarly, if you look at the same object through a different angle, or change the light source, the same object can appear different. Consider the color of a dress which appears different on a sunny afternoon, and at evening. Also, the physical appearance to different observers can be different, simply if you look at the same thing with different angles.

Hallucination is seeing things, though there is no physical existence of the same. Thus, since a person who hallucinates is able to envision things though they’re absent, it proves that the theory of naive realism is incorrect.

Thus, naive realism can be seen in everyday life, when we tend to become biased about our own perspectives. As a theory of perspective, it is a study of deep research for anthropologists and psychologists alike.