What is a Self-fulfilling Prophecy and How does it Work?

Self-fulfilling prophecy is a concept which states that by predicting a false outcome, we alter our behavior and actions, such that the predicted outcome ultimately becomes true. A more detailed explanation of this concept with examples will be provided in this PsycholoGenie article.

Home / Uncategorized / What is a Self-fulfilling Prophecy and How does it Work?

Self-fulfilling prophecy is a concept which states that by predicting a false outcome, we alter our behavior and actions, such that the predicted outcome ultimately becomes true. A more detailed explanation of this concept with examples will be provided in this PsycholoGenie article.

Have you ever had an experience where you’re able to ‘predict’ the outcome of something that you’re a part of? For example, let’s say you’re about to answer an interview and you’re completely confident, you even predict that you will get the job―and sure enough, you do exceptionally well and are offered the job. Or there’s a time when you’re really not feeling up to going out socializing and you predict that you’re going to have a horrid time; and it really does turn out that way―by the end of the evening, you are just dying to get home and be by yourself. These ‘predictions’ of being able to tell what the result of something might be, are not really predictions, per se; they are, in fact, what we term as self-fulfilling prophecies.

What is a self-fulfilling prophecy? A self-fulfilling prophecy can be described as a false prediction of a situation which alters one’s behavior and attitude, which, in turn, causes the prediction to come true. This means that, by thinking of an outcome, we model our behavior and actions to lead to that exact outcome even though it might not have necessarily turned out that way. In the following sections of this PsycholoGenie article, we will get into the details of this concept and explain its workings in greater detail with the help of examples.

The term self-fulfilling prophecy was coined by sociologist Robert K. Merton in the year 1948, who went on to describe it as “The self-fulfilling prophecy is, in the beginning, a false definition of the situation evoking a new behavior which makes the original false conception come true.” Though instances of prophecies existed in literature and other works, it was Merton who was responsible for formalizing its structure and defining its consequences.

The Workings of a Self-fulfilling Prophecy 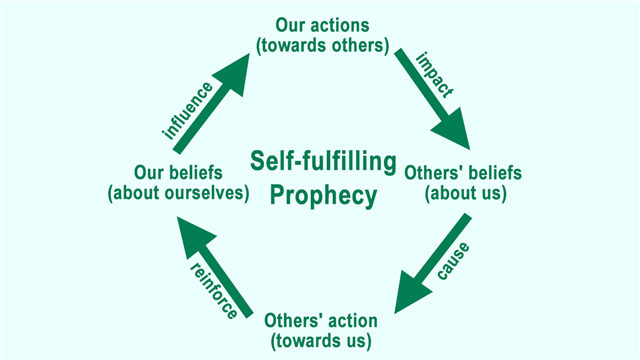 The concept of self-fulfilling prophecy is closely associated with positive and negative thinking and the capacity of the human mind. It works on a simple belief―the way in which we think influences our behavior and actions (leaning towards what we are thinking) which ultimately affects our performance. In simple terms, this theory works on the belief that the kind of thoughts we feed our mind (negative or positive) will influence the mind to strive to make exactly that happen by influencing our efforts and behavior and thereby ultimately causing the prediction to come true.

To cite a simple example―before answering an important test, a student keeps thinking, ‘What is the point of giving the test, I haven’t studied well enough, I’m going to fail’. This might not necessarily be true, he might be well prepared, but because he keeps feeding his brain with these negative and defeatist thoughts, he tends to fumble through the test, forgetting important things, or making silly mistakes, which ultimately does lead to his failing the test. He then gloats about the fact that he was right, he did fail the test.

For example, a person who believes that she will succeed at an interview will portray that confidence in her mannerisms, and answer questions without faltering or fumbling―this will impress the panel of interviewers, thus getting her the job. So, because her actions and mannerisms portrayed confidence, the interviewers were impressed and gave her the job … just as she had predicted.

The following illustration will explain this concept better.

One of the best examples of a self-fulfilling prophecy is that of the famous placebo effect. In this, a patient is given a tonic and told that it is one of the most powerful and effective medicines that will get them feeling better in no time. In reality, the ‘medicine’ is not really a medicine and it does not have any extraordinary powers. But because the patient is not aware of this, he really believes that he has been given a powerful med that will get him better in no time. Because of this positive thinking, he constantly sends a message to his brain that he will get better, which in turn enhances his immune system and he ends up getting cured―just like he was told he would.

Another very famous example of this concept is found in the play Oedipus Rex. In this, it is prophesied that king Laius will be killed by his son, Oedipus, and will marry the queen. In order to prevent this, the king abandons his son and leaves him to die. However, the son is saved and raised by a couple. As he grows up, he hears of the prophecy as well and in wanting to prevent the outcome leaves his home (he is not aware that the couple who has raised him are his adoptive parents). While traveling, he comes across king Laius, gets into an argument with him and kills him. He thereafter proceeds to the king’s kingdom where he frees the people from the Sphinx; as a reward for his bravery, Oedipus is made the king and marries the widowed queen… who is his own mother. Thus making the prophesy true.

How does this concept work in relationships? Let’s say for example that a woman starts dating a man and she does not really look upon the relationship as having any sort of future and turning into something serious. She therefore does not invest in it as much causing her partner to feel distanced and leading them to drift apart. When this happens, she thinks back to her initial prediction that the relationship had no future and that she was right.

A famous experiment called the ‘Oak School Experiment’ was conducted in 1968 by psychologist Robert Rosenthal to study the concept of self-fulfilling prophecy in relation with teachers and students. An IQ test was conducted and the teacher was told that a specific group of students were gifted and special (in reality, a random group was selected). They tested the students after a lapse of 8 months and found that the students whom they had called ‘special’ showed a significant increase in their IQ over those who were not a part of this group. This happened because the teacher was told that they were gifted, and so her general attitude towards them was different, she encouraged questions, provided extra help, smiled more. This confidence that the teacher showed in the students caused them to work hard, thus leading to better scores and improving their IQ.

This concept is woven as the underlying concept in many movies. The most famous examples are those of Lord Voldemort from the Harry Potter series and Darth Vader from the Star Wars series. Both were told of a prophesy that they would be defeated and in order to prevent that they set about destroying the concerned people. However, it was their efforts to destroy people that created conditions by which the protagonist emerged and defeated them, thus making the prophecy true.

The concept of self-fulfilling prophecy is a very interesting one and just goes to prove that the human mind has a very intriguing mechanism of working. It shows us that not only can we predict something, we can also make it happen.