To Each His Own: What is the Real Meaning of Rashomon Effect?

The Rashomon effect is a phenomenon that describes how a single entity is described differently by different people. In the following PsycholoGenie article, we will understand this concept in greater detail.

Home / Uncategorized / To Each His Own: What is the Real Meaning of Rashomon Effect? 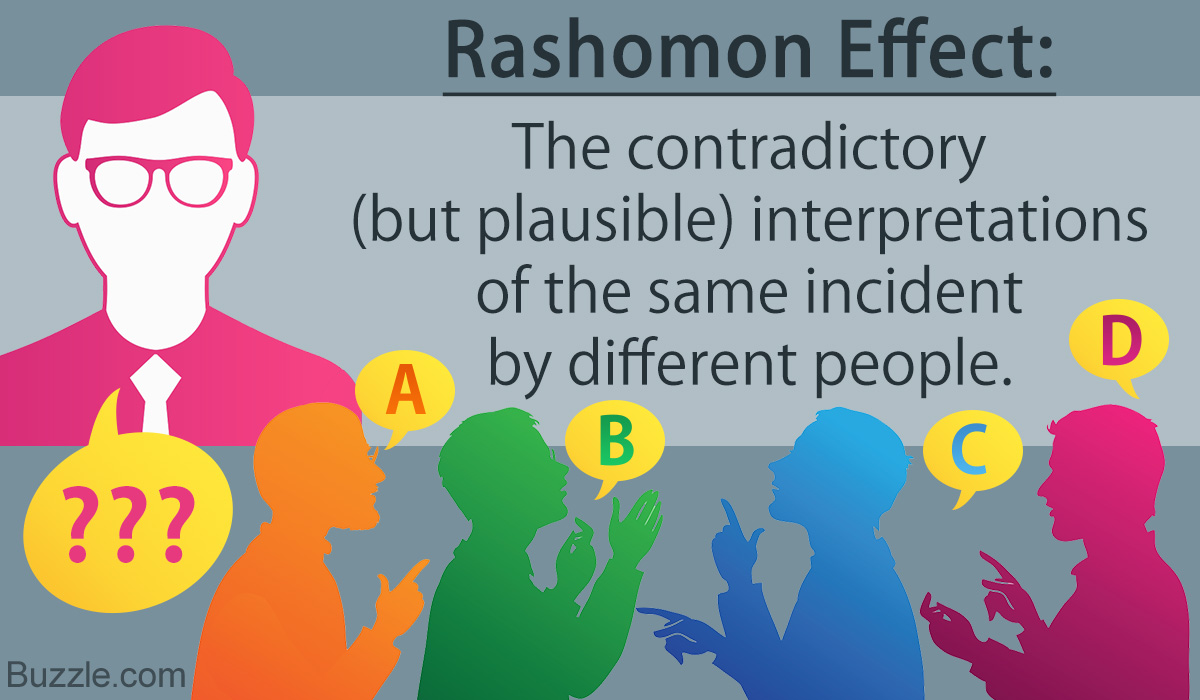 The Rashomon effect is a phenomenon that describes how a single entity is described differently by different people. In the following PsycholoGenie article, we will understand this concept in greater detail.

The word ‘Rashomon’ is always written with a capital ‘R’.

The Rashomon effect is described as the contradictory interpretations of an event by different people―the same event is interpreted completely differently by different people, even though they have witnessed the same incident. Does this mean that there is misleading involved? And if not, why does this happen?

In this PsycholoGenie article, we will understand what the Rashomon effect meaning entails, why it comes about, and whether it is popular today.

The Rashomon effect derives its name from the 1950 Akira Kurosawa film by the same name―Rashomon. The story revolves around the rape of a woman and the murder/suicide of her husband in a forest. It portrays the differing accounts put forth by the husband, wife, and the witnesses of the event. Each of the characters relate the incidents as a contradiction of the other, but they describe them in such a convincing manner that the audience tends to believe them all.

This phenomenon of relating the same incident through varied interpretations was so novel and unique that it came to named The Rashomon Effect since.

Why Does the Rashomon Effect Come About?

The Rashomon effect, like we’ve said before, highlights the contradictory interpretations of the same event by different people. But because these are accompanied by facts, each of these interpretations seem completely plausible … wherein lies the confusion and dilemma.

But why does this happen? This happens, not because people lie, but because they interpret the incident based on their own perceptions. Thus, even when the incident is (seemingly) an independent entity, it is still speckled by a profusion of the person’s psyche, experiences, expectations, and memory. He thus has a subjective take on the incident and thereby the recollection of the same is, in that vein, subjective. It is due to this that it becomes extremely difficult to verify the truth.

Seeing as how this effect is commonly experienced in criminal investigations, as well as other court proceedings, it is considered extremely important and path-breaking even today.

Other than that, given the nature and its capacity to evoke strong emotions, this effect has been used rather liberally in movies, novels and other literature, and television sitcoms. In fact, it is a very popular narrative device. The angle that it provides to a piece of art cannot be paralleled by many others. It makes the audience think and question and that is where its success lies.

Here’s a simple example to understand how the Rashomon effect works in everyday life. Take for example that you meet a few friends over for dinner and the conversation is steered to the city park. You say that it’s a lovely place where you go to de-stress and relax, while your friend says that it’s a filthy place that is swarming with mosquitoes and has weird characters lurking about. You see how that works?

The park is the same, but the ways in which the two of you perceive it is different―this is the Rashomon effect. For a third person who’s witnessing this conversation, both viewpoints will seem legitimate because you are, after all, stating facts; but, there will be a dilemma in his mind about whether the park is worth visiting or not.

In Movies and Television

The following are a few examples of the Rashomon effect in movies and television.

• The Woman in Question
• Hero
• The Outrage
• Hoodwinked!
• Gone Girl
• Alvin and the Chipmunks – Chipwrecked
• Once Upon an Ed – Ed, Edd n Eddy
• The Fresh Prince of Bel-Air – Will Goes a Courtin’
• Happy Days – Fonzie Gets Shot
• Tall Tales – Supernatural

The following are a few examples of the Rashomon effect in literature.

Even though the Rashomon effect takes on a very different tone when it is experienced as a part of criminal proceedings, the fact is that it is a very common phenomenon that most of us not only experience, but also practice.