Negative or Positive Dogma – What Does Wishful Thinking Mean?

Wishful thinking is loosely based on the belief that positive thinking leads to positive outcomes ... or that if you believe in something, then you can make it happen. Now does that really make sense? Not quite. But that doesn't stop most people from indulging in it. 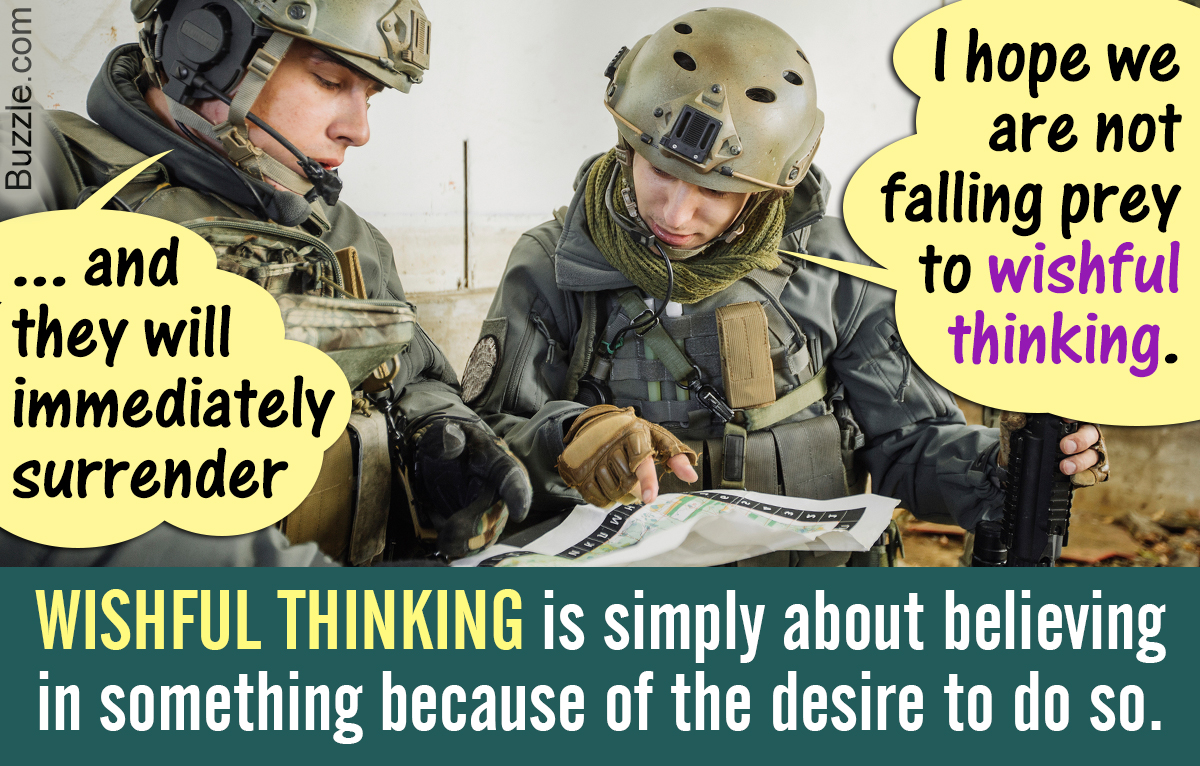 Wishful thinking is loosely based on the belief that positive thinking leads to positive outcomes … or that if you believe in something, then you can make it happen. Now does that really make sense? Not quite. But that doesn’t stop most people from indulging in it.

Wishful thinking is one thing, and reality another.
― Jalal Talabani

There is no dearth of such quotes on wishful thinking. Nor is there a dearth of people who indulge in it. And yet, very few people know what it actually means … that it’s an informal fallacy. (In psychology, an informal fallacy would be an argument whose premise fails to support its conclusion.)

What is Wishful Thinking in Psychology?

Wishful thinking is basically the erroneous belief that something that you want to happen will happen, even though it is highly unlikely or even impossible. This belief is fueled by the interpretation of facts and events in the manner one would like, instead of taking the logical approach. It’s simply about believing in something because of the desire to do so; that explains why it is called wishful thinking.

Besides being a cognitive bias, wishful thinking is also a logical fallacy, in the sense that it is an argument whose premise in itself expresses a desire for the conclusion to be true. In a broad sense, it states that something is true because you want it to be true. For instance, I wish that ‘X’ is true, and therefore, ‘X’ is true. By that logic, if you want something to be true, you just need to wish it was. Something about it doesn’t seem right, right? Well, that’s why it’s a fallacy.

One of the best examples of this concept can be seen in the context of sports. Before a match, many people confidently state that their team will win. It actually means they want their team to win, and therefore, they wish it happens. There is no dearth of such examples.

✦ After a break-up, either partner thinks that the other person will change his/her mind and come back, even when he/she has explicitly said that he/she won’t.

✦ A person wishes to be rich, and therefore, will become rich. That he doesn’t work for it, is another story.

✦ A student thinks that he will get A+, because he deserves it. It’s a different thing that he hasn’t studied enough for it.

✦ At the onset of a war or during the preparation, the leader thinks that the enemy will immediately surrender.

✦ One of the most popular examples of wishful thinking is life after death, which prompts many people to look at life events optimistically.

This concept is not restricted to laymen. Even scholars are plagued by it. Renowned economist Irving Fisher, for instance, had famously said that, “stock prices have reached what looks like a permanently high plateau”, and within a few weeks, the stock market crashed, eventually leading to the Great Depression.

Now that’s not to say that wishful thinking is always bad. Even wishing or hoping without making any claim amounts to wishful thinking, but in such cases, it causes very little or no harm at all.

Despite the fact that it is a fallacy or false belief, wishful thinking is surprisingly popular. Children are introduced to this fallacy by parents through fairy tales, the myth of Santa Clause, etc. Once it gets ingrained, people don’t even realize when their desires start surfacing in the form of truth assumptions. And worse still, when they are confronted by the truth, they go on to supplement wishful thinking with aggression or denial.