Have you been in situations wherein you try to suppress an obsessive thought just to discover that instead of forgetting, you're thinking even more about it? Paradoxical intention suggests that you do the exact opposite. Confused? Try confusing yourself even more, and you'll eventually understand the concept better. 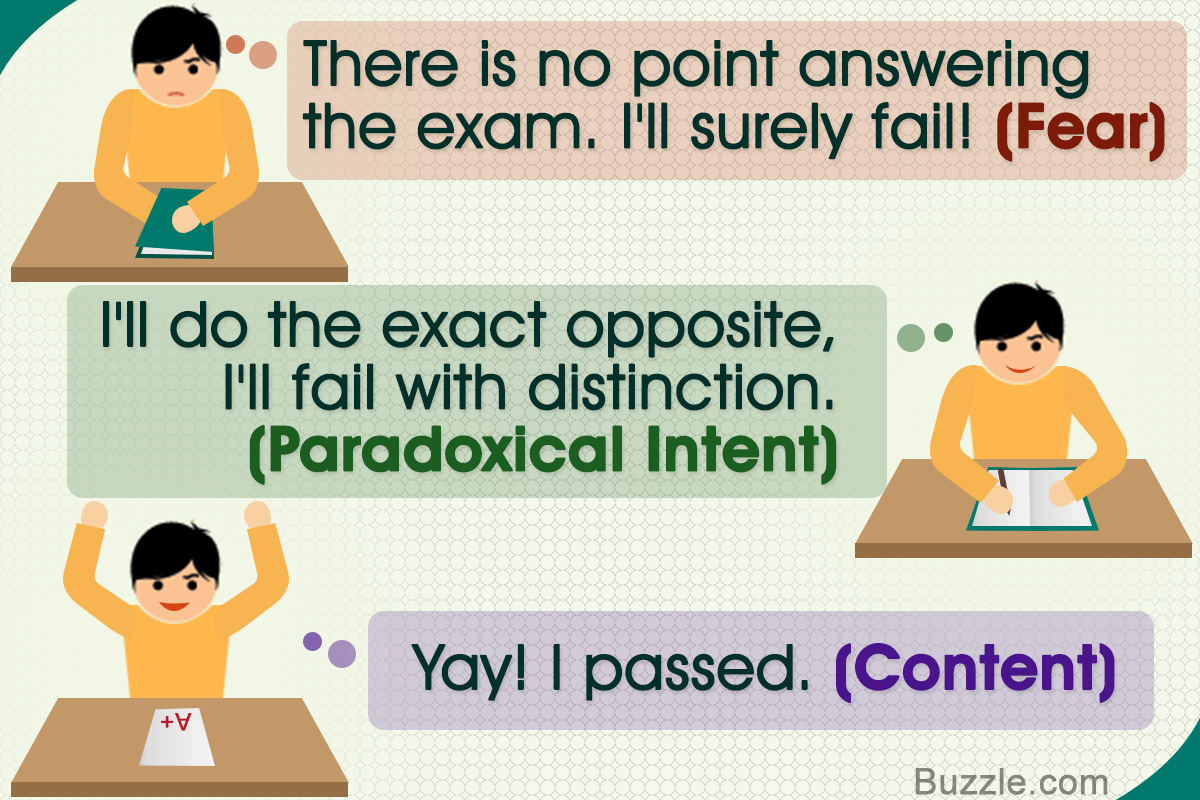 Have you been in situations wherein you try to suppress an obsessive thought just to discover that instead of forgetting, you’re thinking even more about it? Paradoxical intention suggests that you do the exact opposite. Confused? Try confusing yourself even more, and you’ll eventually understand the concept better.

What is Paradoxical Intervention?

Paradoxical intervention, unlike intention, refers to the steps taken by another individual (not self) to channel one’s mind towards a contradicting stimulus in order to rid a disorder.

To make things easy, let’s split the two words and understand the meaning of each separately. A paradox is a contradictory or absurd statement (against popular opinion) which may still be true. The meaning of intention, technically, is conceptions formed by channeling the mind towards a stimulus. Thence, paradoxical intention is a planned or intended way of contradicting a thought or habit in order to eradicate it or reduce its obsessiveness.

The paradoxical intervention therapy originates from psychotherapy; it was conceptualized by Dr. Victor Frankl (founder of Logotherapy), who justified its application to treat several anxiety disorders. The therapy is widely used to treat acute as well as chronic Insomnia. However, its application is pretty much relevant for overcoming anxiety, fear, obsession, or neurotic habits encountered in daily life.

◉ The mind does exactly the opposite of what we wish to do. This is evident in good as well as bad instances. Let’s take an example. Sometimes, it so happens that a guy begins liking a girl, he tries to get close, make friends, and ultimately date her. If his desperation to begin a relationship with her is too high, he would simply end up projecting a clingy image of himself. This would worsen things, and might even result in the girl showing disinterest towards the guy.

◉ Another example with a negative aspect (avoiding something) could be observed in people suffering from phobias. These people always try to avoid the things they fear. A claustrophobic would avoid confined spaces like elevators, crowded areas (public transport, shopping malls, etc); Atychiphobia (fear of failure) affected people are so fearful of failing in any test that they just avoid the thought of confronting it. People with the latter, tend to avoid any situation or task they are asked to perform due to an irrational belief that it won’t be 100 percent successful.

◉ As mentioned earlier, paradoxical intent therapy is nothing but a measure to reduce the desperation (first example), or anxiety (second), or extreme performance pressure (third), in order to calm the mind. A calm mind automatically does what an agitated mind won’t. If the boy in the first example had simply decided that he won’t even try to be friends with the girl whatsoever; he would actually end up making friends with her and maybe even ask her out eventually. On the contrary, people trying to avoid things like in claustrophobia should intentionally visit confined places very frequently. Similarly, a person with a fear of failure should repeatedly confront testing situations.

◉ Phobias are simply irrational fears clubbed with heaps of anxiety. Kill the anxiety, and the fear is gone. Like phobias, paradoxical intent also works in cases of certain psychological disorders. These mostly include sleep-wake disorders, anxiety disorders, eating disorders, and others. Let’s take the example of insomnia. Insomnia is a psychological disorder, wherein people suffer from sleeplessness or the inability to sleep. When treating insomnia using paradoxical intervention, psychiatrists or psychologists would typically ask the client or subject to try to stay awake as long as he can; they reason this by saying that they wish to analyze his/her thought pattern prior to falling asleep.

◉ Insomniacs, in most cases, can’t sleep or can’t sustain sleep due to the associated anxiety of not being able to sleep. Psychiatrists simply distract them from being anxious, asking them to stay awake. This automatically relaxes their mind, which is the key factor to a peaceful sleep.

◉ In other disorders like binge (Bulimia Nervosa) or purging (Anorexia Nervosa) disorders, psychiatrists employ somewhat similar methods. Therapists, in such cases, do not aim to change a symptom, instead target the unsuccessful solution(s) that the client applies to relieve the symptom. In several cases, the therapist actually tells the client to retain the symptom and would even tell him/her to maximize it. The client therefore tries to retain the symptom, and doesn’t make any effort to stop it. This kills the anxiety, and the symptom disappears.

In psychology, paradoxical intervention therapy is used widely to treat several behavioral disorders. Its effectiveness has been tested in several studies and is reported to work in most cases.