Understanding the Psychology Behind Aversive Racism

Even well-intentioned people can be racist, without actually being aware of it. This sums up the meaning of 'aversive racism', which is explained here with the help of its definition and some interesting examples.

Even well-intentioned people can be racist, without actually being aware of it. This sums up the meaning of ‘aversive racism’, which is explained here with the help of its definition and some interesting examples. 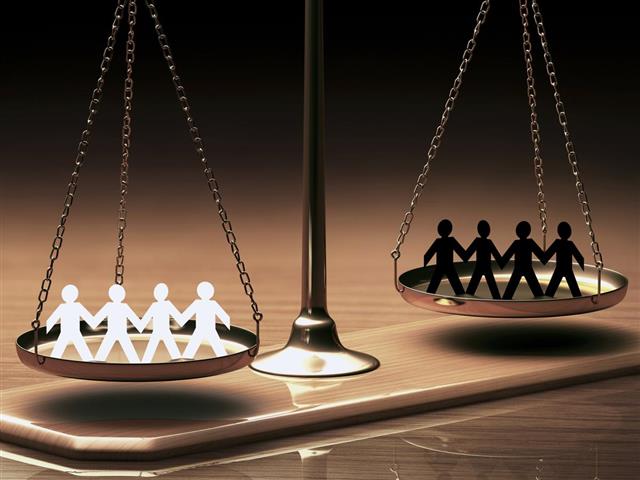 Research indicates that babies can spot racial differences from the age of 6 months.

Racial segregation was a dark period in American history, lasting from the second half of the 19th century to the middle of the 20th. This policy was an attempt to keep the African-American population subjugated, despite the abolition of slavery, by denying them equal access to public facilities. It received its final blow in 1954, when the US Supreme Court banned segregation in public schools, and in 1964, when all forms of discrimination were outlawed. With more than 60 years having passed since the former event, most people would think that racism in the country is a thing of the past. While this is mostly true, discrimination still occurs in a subtle form. This attitude is known as aversive racism, and is explained below with popular examples, such as job selection decisions.

Aversive racism is the behavior shown by a person who genuinely believes in racial equality and acts accordingly, but unconsciously harbors some negative feelings about other races. As compared to blatant racism, where a person explicitly shows negative behavior towards other races, this behavior is more subtle. Despite the reduction in direct discrimination in countries such as the US, UK, Canada, and the Netherlands, it is believed that many white individuals show such subtle forms of racism.

There are several factors responsible for the rise in aversive racism. Most humans tend to subconsciously categorize people into groups, because it is easier to judge groups rather than individuals, which puts a load on our limited cognitive resources. Skin color is the most apparent way to observe differences between people.

Moreover, another human tendency is to rate people belonging to the in-group (‘we’s’) higher, than those from the out-group (‘they’s’). Because white individuals are the majority in several countries, they subconsciously consider themselves belonging to the in-group, while other races, such as African-Americans, Asians, and Latinos are considered part of the out-group.

In the current cultural context of countries like the United States, since overt displays of racism tend to get looked down upon, most individuals genuinely believe in the ideals of justice, fairness, and racial equality. However, many white individuals harbor subconscious feelings and negative emotions about other races, because they see them as a different group. The conflict between their conscious egalitarian beliefs and subconscious negative feelings makes such individuals avoid or show an ‘aversion’ to other races.

Instead of overt racism, aversive racists have subtle feelings of fear, anxiety, and discomfort towards people of other races. Due to this reason, they tend to avoid interacting with such groups altogether, or interact only in tightly-controlled situations. The racist behavior of such individuals becomes apparent in the following situations.

It was observed that, when white individuals were the only bystanders when an African-American or another white person faced an emergency, they offered help without any racial discrimination. However, in another emergency, where they were several bystanders, aversive racists were found to offer help less frequently to an African-American as compared to another white individual. This was because of the belief that since multiple bystanders were present on the scene, the responsibility to offer help is shared among them. This helps such individuals act out their subconscious racist beliefs, since the reason cannot be attributed to racial motivation.

Some white college students were asked to participate in a survey, where they decided if a college applicant was suitable for admission or not. They were provided with a list of applicants (both white and African-American) divided according to poor, excellent, and ambiguous credentials. Most participants did not discriminate between a white or African-American applicant in case of poor or excellent qualifications. However, in case of applicants whose suitability was doubtful, the participants tended to rank a white applicant higher than the other race, despite both having identical qualifications. Since the decision in this case was ambiguous, the participants could discriminate without feeling guilty of racism. Similar results were observed in another survey, where some white participants were asked to judge the suitability of different applicants for a job.

In a survey, white participants were shown photographs of different individuals, both white and African-American. Care was taken to observe the participants’ eye movements, to understand which facial features received the most attention. When the photograph shown was that of a white individual, most participants observed the eyes. On the contrary, the photograph of an African-American drew more attention to his/her nose and lips. Psychologists saw this as subtle proof that people inherently tend to focus on visible racial differences . Since the participants did not know they were being judged for racism, their subconscious beliefs became apparent in this survey.

Aversive racists generally avoid any behavior which makes their negative feelings apparent, either to themselves or to society. For this reason, such an attitude is rarely noticed, making a change in mindset pretty difficult. As a consequence, racial minorities tend to see this as just another form of discrimination, which leads to an atmosphere of mistrust. Most experts believe that the key to correcting such an attitude lies in making the individual aware of these underlying discriminatory feelings, and using his/her genuinely good intentions as motivation.