Is pessimism the exact opposite of optimism? Join us as we compare these two states of mind to find out whether they are at loggerheads.

Is pessimism the exact opposite of optimism? Join us as we compare these two states of mind to find out whether they are at loggerheads.

When subjected to a glass half filled with water, pessimists are more likely to refer to it as a ‘half empty glass’, while optimists are more likely to address it as a ‘half full glass’. This is just one of the several points of distinction between pessimism and optimism. They are the two sides of the same coin, and excess of either in your life can spell a disaster for you.

Whether the two are opposites of each other, has been a subject of debate of late. All this while, it was assumed that pessimists and optimists stand at loggerheads in terms of thought processing. However, more recent studies have proved otherwise. Going through the brief explanation of either of these concepts will help in making them more clear. 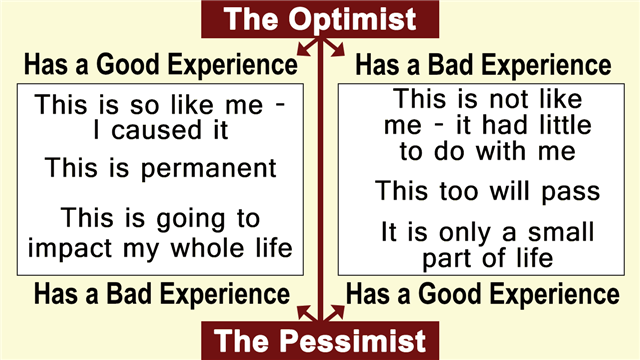 The way in which we reason plays a crucial role in determining our success. A pessimist is more likely to get depressed due to the occurrence of a negative event, which will automatically affect various aspects of his life and eventually hamper his success.

When a pessimist has some good experience, there are chances that he will overlook the same, as he won’t be able to come to terms with reality that this good thing has happened to him because of his own efforts. On the other hand, when an optimist has some good experience it won’t just make him happy, but will also bolster his efforts and contribute to his success. When it comes to bad experience though, the pessimist will hold himself responsible for the turn of events, which will again turn out to be a huge blow to his morale. The optimist, on the other hand, will ignore the bad experience as a once in a while affair, which will make him go in search of success with more determination and enthusiasm.

Another key difference between pessimistic and optimistic individuals is the way they take a note of people’s criticism. A pessimist is more likely to take positive criticism in a negative manner, while an optimist is more likely to take negative criticism in a positive manner. When called ugly, a pessimist will always assume that the view belongs to the whole world, while the optimist will dismiss it as an individual’s opinion.

Though rare, in some cases, being pessimistic can be an advantage in itself, while being optimistic can be a disadvantage. A pessimist businessman, for instance, is more likely to take the worst case scenario into consideration and take precautionary measures to make sure that he is not caught unaware of approaching disaster. An optimist businessman though, is more likely to assume that nothing bad can happen to him and continue being carefree until trouble knocks the door down. (This also highlights the fact that being over-optimist can spell trouble for you.)

While that comparison may make you believe that pessimism and optimism are opposites of each other, experts think otherwise. Studies have also proved that having more of either doesn’t necessarily mean you will have less of the other. This is also backed by their psychological definitions, which state that the factors responsible for them are completely different. So, at the end of the day, it would be safe to say that the key to happiness lies in the middle when it comes to the battle between these two.