Causes of Dependent Personality Disorder You Need to Know Now

Dependent personality disorder (DPD) is a condition which makes a person extremely dependent on a particular 'caregiver', who is perceived to be capable enough to supply the emotional and physical needs of everyday life. People with DPD believe that they cannot take care of themselves; therefore, they depend upon a 'strong figure' who can help them survive. 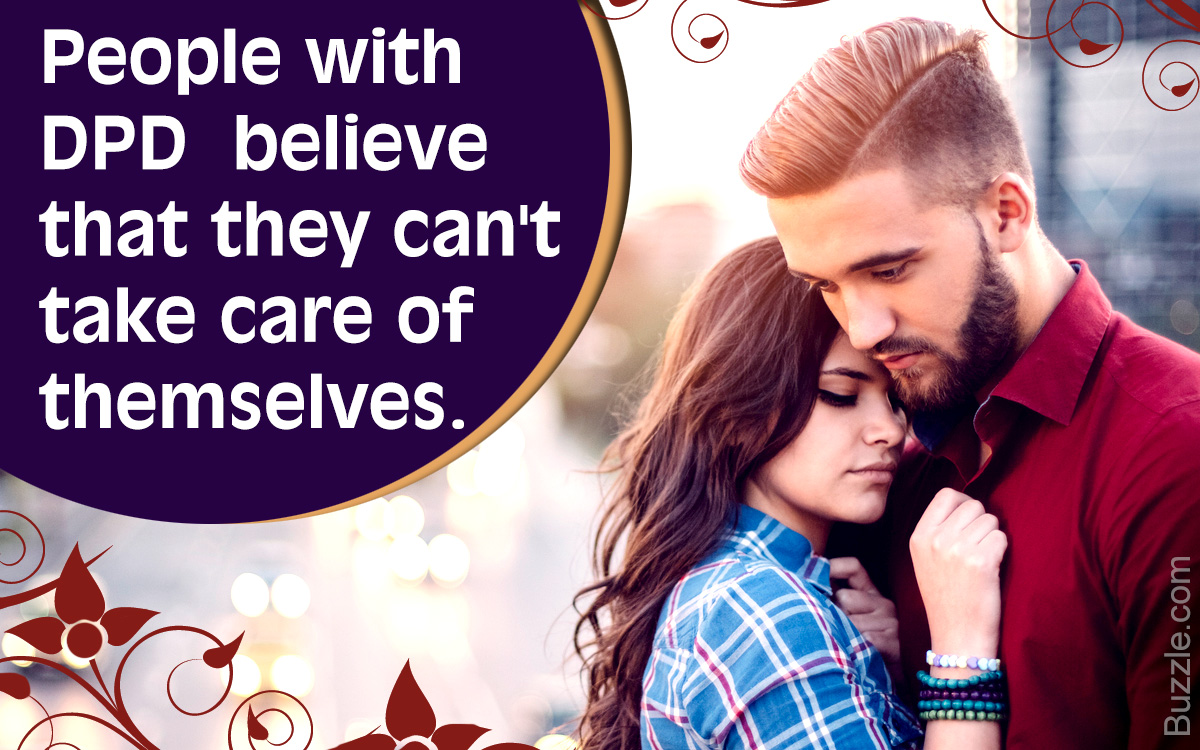 Dependent personality disorder (DPD) is a condition which makes a person extremely dependent on a particular ‘caregiver’, who is perceived to be capable enough to supply the emotional and physical needs of everyday life. People with DPD believe that they cannot take care of themselves; therefore, they depend upon a ‘strong figure’ who can help them survive.

Dependent personality disorder introduces fear and insecurity in terms of being separated from the caregiving figure, who is believed to be the sole supplier of all the necessities in life. People with this disorder believe that they are incapable of taking responsibilities, even for the simplest of matters. They perceive the world to be too harsh, keeping in mind their lack of confidence in themselves, and consider it impossible to survive on their own. This is the reason why they look for someone who they think is strong enough to keep them safe and sound from the difficulties in the world. They want to feel secure in each and every possible way, which is why they tend to become extremely submissive, docile, and clingy towards that one prominent caretaker in their life. They never disagree with anything, and even suffer abusive behavior from the caregiver without any complaint. These people also find it difficult to maintain healthy relationships, and fail to take the initiative for anything, be it something as simple as going out for a walk! There are no established causes of this condition, however, various hypotheses have thrown light on some developmental factors during childhood, that correlate with this condition. This disorder is chronic in nature, and affects both men and women.

The exact reason why only some people suffer from this disorder and not others, is still unknown. Continual research has resulted in the evolution of various hypotheses after analyzing the signs and symptoms of this condition. The traits of DPD have been observed in children as young as 6-7 years of age. Therefore, the reasons can be associated with the biological, psychological, and developmental factors. Have a look at some of the possible causes which can be linked to the development of this personality disorder.

Research done by experts show a vital correlation between certain inherent biological factors and the development of DPD in a person, which cultivates during childhood and becomes persistent and chronic in nature throughout adulthood. People with a personality disorder can genetically transmit it to their children, as well. Therefore, if this disorder runs in your family, then there is a possibility for it to develop in the descendants also. However, this is just a associative finding and cannot be determined as a certain cause for this condition.

Another point to keep in mind is, that if a person is brought up in a way, wherein it is a part of the cultural norms and tradition to be dependent on a ‘stronger figure’, then it wouldn’t be right to call it a dependent personality disorder. An example for the same would be — a female who is dependent on the opposite sex because the culture demands the female to be docile, submissive, and completely dependent on the male and have no opinion of her own.

The environment in which we live, plays a vital role in the person we become. Like most personality disorders, the roots of DPD can also be associated with the upbringing and social environment during childhood. A few characteristics of DPD include the absence of disagreement, even if he or she doesn’t agree with the caretaker. This is because there is a fear dwelling in the person, fear of abandonment, or harsh criticism against expressing opinions; which eventually leads to the fear of separation from the caregiver. This hesitation towards expressing disagreements can be linked to the experiences of the past, mostly childhood. Maybe, the person has always been punished or humiliated for expressing disagreement. This leads to assured feelings of being worthless, and insecure. Because of such experiences, a fear of abandonment and criticism is established in the mind, leading to a belief that in order to lead a secure and safe life, a strong caregiver is needed.

Separation anxiety is common during childhood; however, in extreme cases, it can cause a lot of negative impact on the child’s mind. Fear is a powerful emotion, and the fear of being separated from the one whom you depend on, in each and every way, can prove to be mentally damaging. Experiencing the death of a loved one during childhood, or separation due to a divorce, can make a person vulnerable towards the fear of separation. If this fear dwells throughout the developing years, then it can make a person prone to developing DPD, wherein the person would be ready to do anything, to any extent, just to be sure that he or she will not be abandoned by the specific ‘caretaker’. Many people with DPD accept abusive behavior, be it emotional, physical, or even sexual. They do not utter a word against the caregiver because they can bear the abuse, not the separation.

Another finding associated with this condition is the link between physical illness during the childhood, and the aftereffect of that illness on the mental development. Usually, children dealing with trauma (of any kind) tend to develop low levels of self-esteem and confidence; which in turn, can affect their psychology as adults. This could be one possible reason why people with DPD believe that they need someone to take care of them or else they will not survive, possibly because they have always been dependent on their family during prolonged illnesses, and otherwise.

Children who are brought up in a very strict environment with an authoritarian parenting style, are more prone to becoming adults who find it difficult to take independent decisions on their own. This is because in an authoritarian parenting style, the parents become the ultimate rulers, and the child is expected to simply obey the orders. The children are not brought up in a manner which encourages them to decide for themselves, in fact, they are often condemned for going against something that has already been set for them. This is the reason, that even after becoming adults, they need guidance in doing the simplest of things, say, to take a decision to wear a particular outfit or not! The relational roles in such families are not well-defined, and the lack of encouragement, emotions, and affection, makes the person doubtful regarding their individual abilities and choices.

This point can be considered as the consequence of all the points mentioned above. It is ultimately a person’s opinion about himself that leads to the quality of life he lives. When a person has a belittling self-image, be it for any reason whatsoever, that he or she is worthless and derogatory, that he or she has no judgment of right or wrong, that he or she is helpless and weak without the presence of a strong caregiver, it is natural for one to strongly depend on others to fulfill their basic needs. It may be a melange of biological, psychological, and social factors that together form a reason for a person to develop DPD.

A part of being responsible is to be able to take decisions in life, which is something that people with DPD are incapable of doing. They feel that if they are abandoned by their caregiver, they would be left all alone with no one to cater to their emotional, physical, and financial needs. Another interesting point to be noted is that these people may not necessarily have any attachment towards the individual caretaker, they choose to be with a person just to feel secure and taken care of. Which is why, in case the relationship with a caregiver ends, they tend to get into another relationship and find another ‘caregiver figure’ to meet their needs. Have a look at the symptoms of DPD.

✶ Extreme fear of separation and being left all alone.
✶ Avoid taking independent decisions and responsibilities.
✶ Fear of abandonment or criticism towards expressing disagreements or taking decisions.
✶ Inability to take decisions without seeking advice from others, even in the smallest matters.
✶ Becoming vulnerable, helpless, and highly upset when a relationship ends.
✶ Becoming extremely submissive, meek or passive in a relationship and letting others take decisions on their behalf.

Experts believe that a normal person would never stay in a relationship with a person suffering from DPD for long. However, if the ‘caregiver’ himself is dealing with a disorder which makes him or her prone to feel superior, dominant, and controlling; only then can a person with DPD form a steady relationship with the caregiver. It is sad to state that most of the people suffering from this personality disorder never seek medical attention unless their behavior leads to problems in their relationships and life. The treatment for dependent personality disorder involves psychotherapy, including various therapies and sessions focusing on restructuring their beliefs and thinking towards being independent and confident. The therapist also sets certain achievable goals that the patient needs to achieve, which slowly helps the patients become self-reliant. Medication may also be prescribed to treat certain signs and symptoms like depression, anxiety, and substance abuse, which is also seen in these patients.

Disclaimer: This PsycholoGenie article is for informative purposes only, and should not be used as a replacement for expert medical advice.