A Comprehensive Collection of 60 Famous Quotes By Carl Jung

PsycholoGenie provides a comprehensive list of some of the most famous Carl Jung quotes that delve into varied topics of psychology, religion, and consciousness. 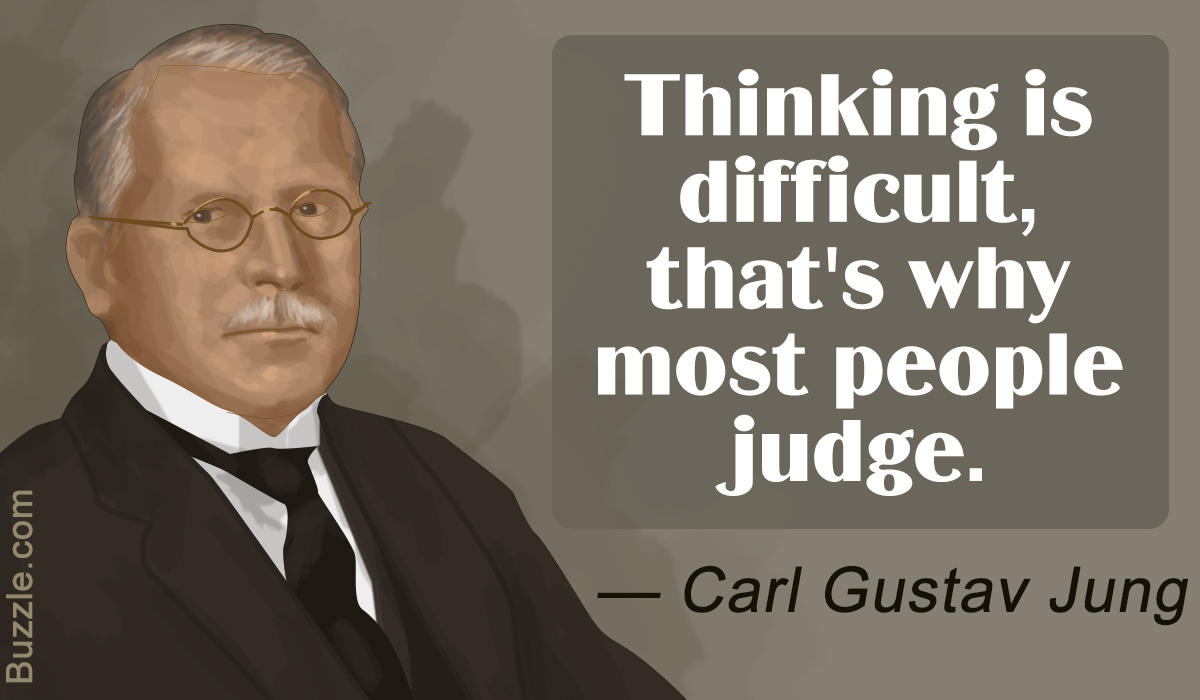 PsycholoGenie provides a comprehensive list of some of the most famous Carl Jung quotes that delve into varied topics of psychology, religion, and consciousness.

“It all depends on how we look at things, and not how they are in themselves. The least of things with a meaning is worth more in life than the greatest of things without it.”
― C.G. Jung

Carl Gustav Jung―the founder of analytical psychology―was a renowned Swiss psychiatrist and psychotherapist. Jung is also credited with the proposal and development of varied other concepts related to psychology, like archetypes and collective unconsciousness, and extraversion and introversion.

While he was mainly considered a psychiatrist, his work has also extended to include and influence subjects related to philosophy, religion, anthropology, literature, and archeology, among others. He was said to be a prolific writer, many of whose works were published after his death in 1961.

In this PsycholoGenie article, we will take a look at some of most influential quotes by Carl Jung that delve into many subjects like God, religion, love, and consciousness.

“Your visions will become clear only when you can look into your own heart. Who looks outside, dreams; who looks inside, awakes.”

“I am not what happened to me, I am what I choose to become.”

“You are what you do, not what you say you’ll do.”

“Knowing your own darkness is the best method for dealing with the darknesses of other people.”

“Loneliness does not come from having no people about one, but from being unable to communicate the things that seem important to oneself, or from holding certain views which others find inadmissible.”

“The pendulum of the mind oscillates between sense and nonsense, not between right and wrong.”

“Until you make the unconscious conscious, it will direct your life and you will call it fate.”

“Every form of addiction is bad, no matter whether the narcotic be alcohol, morphine or idealism.”

“Show me a sane man and I will cure him for you.”

“There’s no coming to consciousness without pain.”

“The most terrifying thing is to accept oneself completely.”

“A true symbol appears only when there is a need to express what thought cannot think or what is only divined or felt.”

“Through pride we are ever deceiving ourselves. But deep down below the surface of the average conscience a still, small voice says to us, something is out of tune.”

“Shame is a soul eating emotion.”

“There is no coming to consciousness without pain. People will do anything, no matter how absurd, in order to avoid facing their own Soul. One does not become enlightened by imagining figures of light, but by making the darkness conscious.”

“It is often tragic to see how blatantly a man bungles his own life and the lives of others yet remains totally incapable of seeing how much the whole tragedy originates in himself, and how he continually feeds it and keeps it going.”

“Nights through dreams tell the myths forgotten by the day.”

“Deep down, below the surface of the average man’s conscience, he hears a voice whispering, “There is something not right,” no matter how much his rightness is supported by public opinion or moral code.”

“What you resist, persists.”

“Without this playing with fantasy, no creative work has ever yet come to birth. The debt we owe to the play of the imagination is incalculable.”

“…anyone who attempts to do both, to adjust to his group and at the same time pursue his individual goal, becomes neurotic.”

“Nobody, as long as he moves among the chaotic currents of life, is without trouble.”

“The reason for evil in the world is that people are not able to tell their stories.”

“No tree, it is said, can grow to heaven unless its roots reach down to hell.”

“When an inner situation is not made conscious it appears outside as fate.”

“Thinking is difficult, that’s why most people judge.”

“If one does not understand a person, one tends to regard him as a fool.”

“Who looks outside, dreams; who looks inside, awakes.”

“Sometimes you have to do something unforgivable just to be able to go on living.”

“The bigger the crowd, the more negligible the individual.”

“We meet ourselves time and again in a thousand disguises on the path of life.”

“Whenever we give up, leave behind, and forget too much, there is always the danger that the things we have neglected will return with added force.”

“Man’s task is to become conscious of the contents that press upward from the unconscious.”

“That which we do not bring to consciousness appears in our lives as fate.”

“The meeting of two personalities is like the contact of two chemical substances: if there is any reaction, both are transformed.”

“Where love rules, there is no will to power, and where power predominates, love is lacking. The one is the shadow of the other.”

“Everyone is in love with his own ideas.”

“A man who has not passed through the inferno of his passions has never overcome them.”

Quotes on Religion and God

“The gods have become our diseases.”

“Explore daily the will of God.”

“God has fallen out of containment in religion and into human hearts―God is incarnating. Our whole unconscious is in an uproar from the God Who wants to know and to be known.”

“One of the main functions of organized religion is to protect people against a direct experience of God.”

“When religion stops talking about animals it will be all downhill.”

“I could not say I believe. I know! I have had the experience of being gripped by something that is stronger than myself, something that people call God.”

“The ideas of the moral order and of God belong to the ineradicable substrate of the human soul.”

“The shoe that fits one person pinches another; there is no recipe for living that suits all cases.”

“The creation of something new is not accomplished by the intellect but by the play instinct acting from inner necessity. The creative mind plays with the objects it loves.”

“The best political, social, and spiritual work we can do is to withdraw the projection of our shadow onto others.”

“If there is anything that we wish to change in the child, we should first examine it and see whether it is not something that could better be changed in ourselves.”

“Every human life contains a potential, if that potential is not fulfilled, then that life was wasted…”

“Nothing has a stronger influence psychologically on their environment and especially on their children than the unlived life of the parent.”

“There can be no transforming of darkness into light and of apathy into movement without emotion.”

“I shall not commit the fashionable stupidity of regarding everything I cannot explain as a fraud.”

“Children are educated by what the grown-up is and not by his talk.”

“…the sole purpose of human existence is to kindle a light in the darkness of mere being.”

A reading through these quotes will have given you an idea of just how intelligent and wise Jung was. His explanation of varied concepts and theories helped not only the field of psychology, but also several others that included philosophy and literature. Which is why he is considered one of the greatest figures of the 20th century.