The self-actualization theory states that there are certain basic needs that an individual has to fulfill in order to achieve his highest potential, that is, self-actualization. In this following PsycholoGenie article, we will look through the basics of this theory and understand what it is about. 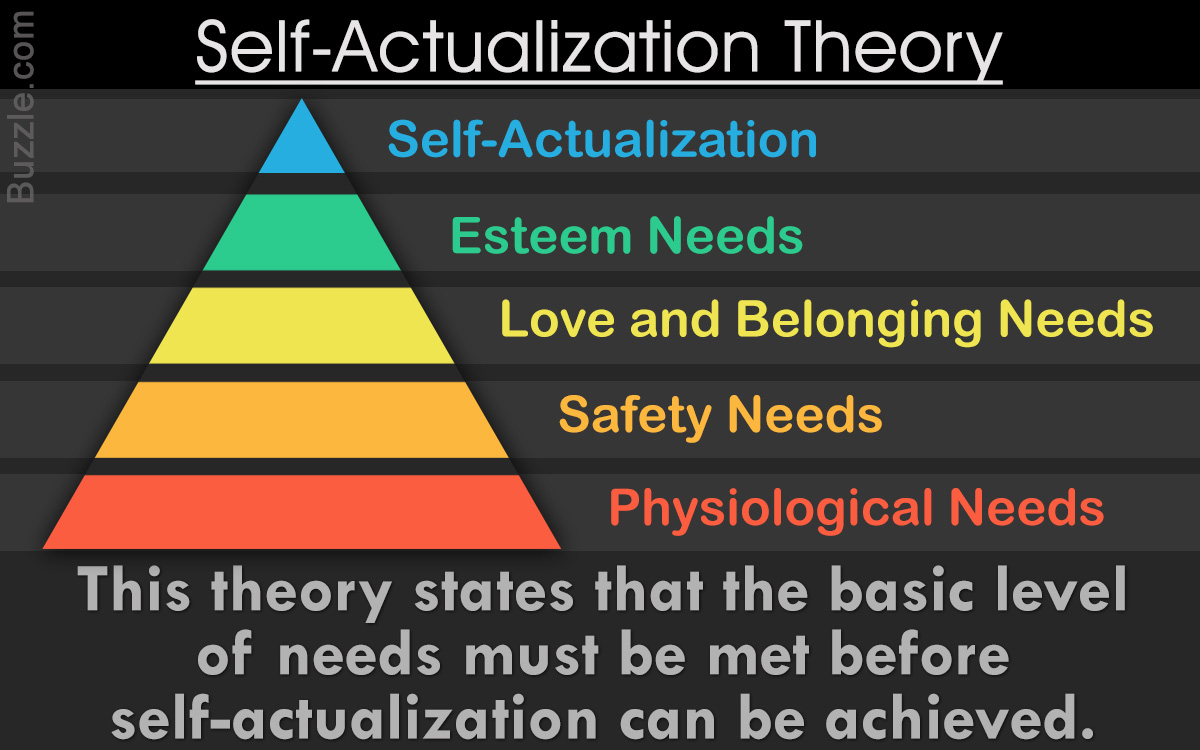 The self-actualization theory states that there are certain basic needs that an individual has to fulfill in order to achieve his highest potential, that is, self-actualization. In this following PsycholoGenie article, we will look through the basics of this theory and understand what it is about.

It was in 1954 that Maslow created the ‘Hierarchy of Human Needs’ to explain self-actualization and put forth the theory in his book, ‘Motivation and Personality’.

The term self-actualization was first used by German psychiatrist and neurologist, Kurt Goldstein to explain the motive that one possesses to reach their full potential. Self-actualization includes concepts like striving for spiritual enlightenment, the pursuit of knowledge, and giving back to society, among others. Several theories came into being after the introduction of this term, however, it was Maslow’s theory of self-actualization, in that, his hierarchy of needs, that gained prominence and turned this theory into one of the most important theories in psychology used to explain human nature.

In this following article, we will take you through the Maslow theory of self-actualization and help you understand the nuances of the same.

Abraham Maslow was a psychologist who mainly studied positive human qualities and the lives of exemplary people. It was on the basis of these studies and findings that he proposed the theory of hierarchy of needs with self-actualization as the highest level of potential that a person can reach. Let us understand this theory in more detail.

The Pyramid of Self-actualization

Maslow’s theory stemmed from his need to understand what motivated and drove people to do things. Maslow believed that people are motivated to achieve certain things in life, and when one need is fulfilled, the person moves to the next need and strives to fulfill that one, and so on and so forth. To explain this idea in further detail, Maslow formed what he called a hierarchy pyramid.

As the image above illustrates, the pyramid was divided into 5 levels―starting at the physiological needs and ascending towards the final level of self-actualization.

The Varied Levels of Needs

Physiological Needs
The base level of the pyramid consists of the physiological needs like air, food and water, sleeping, sex, shelter, and excretion.

Safety Needs
The second level featured needs that had to do with security in terms of resources, employment, family, health, prosperity, and freedom from fear.

Love and Belonging Needs
The third level consisted of those needs that had to do with friendship, intimacy, love, and affection from family, friends, romantic partners, and the work group.

Esteem Needs
The 4th level of the pyramid featured those needs that had to do with qualities of esteem, independence, respect from others, self-respect, confidence, achievement, and respecting others.

Self-Actualization
The last level of this hierarchy consisted of a stage where the person was self-actualized. In that he achieved qualities of creativity, acceptance of facts, lack of prejudice, morality, problem solving and the like.

What Does the Pyramid Signify

Maslow said that for an individual to reach the self-actualization level (the highest level of his potential), he has to first fulfill all the needs that feature in the previous levels, starting at the physiological level and make his way up to last level. Maslow realized that when people’s physiological needs are satisfied, other, higher needs emerge and once those needs are satisfied, still other, higher needs emerge, and the ascent thus continues. Therefore, only when a person has satisfied all his basic (physiological, safety, love, and esteem) needs will he be able to achieve the last level and only then can he truly be known as self-actualized.

Even though it sounds simple enough in theory, in practice, this is a little complicated to achieve. The ascent up the pyramid is not always a smooth-flowing one and is thwarted by the want to fulfill the needs from the basic levels over and over again. Moreover, the course of one’s life and varied other experiences (loss of job, divorce) will lead to people fluctuating between the varied levels of hierarchy. Maslow also noted that not all people follow a fixed pattern of achieving self-actualization. For some people, the need for self-esteem may be greater than their need for security or love. Thus, as Maslow noted, only one in a hundred people are able to become fully self-actualized because people are stuck in the vortex of these basic needs and moreover, society seems to reward only that motivation which is based on social needs, love, and esteem.

The Changes in the Pyramid

Cognitive needs consisted of a want of knowledge, meaning, and information, whereas aesthetic needs consisted of the need for appreciating and looking for beauty, balance, and form. The highest level in the 8-level pyramid was taken up by the transcendence needs which included the need for helping others to gain self-actualization.

Maslow stated that the percentage of people who would go on to achieve self-actualization were very limited. However, based on extensive research of those people he considered to have reached the highest level, he was able to draw a list of characteristics. They are as follows.

► These people have a realistic perception of their own selves, of others, as well as the world around them.
► Additionally, they are able to accept people as well as their own selves along with their flaws. The shortcomings and other flawed factors are accepted with tolerance and humor.
► They have great problem-solving skills, which means that not only are they able to solve their own problems, they are also able to (and want to) help others and the world outside.
► They rely on their own judgment and intelligence to form opinions about people and things. They are not influenced by the external environment, or the people in it.
► They are extremely spontaneous in their attitude and never succumb to the pressures of how others want them to behave. However, they are also known to abide by the law.
► While they can do extremely well in group settings, they require time to be by themselves such that they can work on developing their own individual potential.
► These people have an innocent look towards life, where they are able to appreciate something with the same intensity every time they look at it.
► Not only are they able to find and appreciate humor in the world and in other people, they are also able to laugh at themselves.
► Self-actualizers form deep, meaningful interpersonal relationships in life.
► They are known to have peak experiences which are occasions marked by feelings of harmony, deep meaning, and ecstasy. These experiences leave them feeling one with the universe, calmer, full of positivity, love, and purpose, and a profusion of several other positive emotions.

Based on these characteristics, Maslow also formulated certain ways of how to satisfy self-actualization needs. These included factors like:

► Having confidence in your own judgments and not depending on others.
► Looking at life through the eyes of a child―full of innocence, concentration, and absorption.
► Trying new things in life instead of sticking to the tried-and-tested path.
► Working hard and taking responsibility of actions.
► Identifying and giving up on your defenses if found to be limiting your growth.
► Being honest with yourself and others.

The self-actualization theory was criticized on the basis of Maslow’s methodology of testing. In formulating the theory and the characteristics of self-actualization, Maslow had used a method called biographical analysis, in which he studied the biographies and writings of 18 people (a majority of whom were white males) whom he felt were self-actualizers. Thus, the list of characteristics that he developed, seemed more biased and centered around these 18 people than the public in general. And therefore, an objective approach was seen to be missing, as the opinions and subjective views of the examiner gained prime focus. Hence, it was opined that what Maslow considered to be ‘self-actualization’, need not necessarily be a universal concept.

Secondly, according to Maslow, a person was supposed to have fulfilled the basic needs in order to move on to the higher needs of self-actualization, and that without these basic needs having been fulfilled, it was not possible to achieve the same―in that manner, one depended on the other. However, this was found to be a flawed view. It was studied that even though a person who had not met his basic needs (like hunger) he was still capable of achieving a higher order of needs like love and esteem. Similarly, a person who was considered ideal for being ‘self-actualized’, like an artist, could well be a pauper (another basic need not fulfilled).

Thus, on many counts, Maslow’s theory was falsified.

While Maslow’s theory of self-actualization may not be used as a yardstick to measure a person’s level of self-actualization, it is still one of the most widely studied and taught theories. It was, after all, an approach that gave the world a whole new perspective in the field of human nature, and for that, Maslow will always be celebrated.