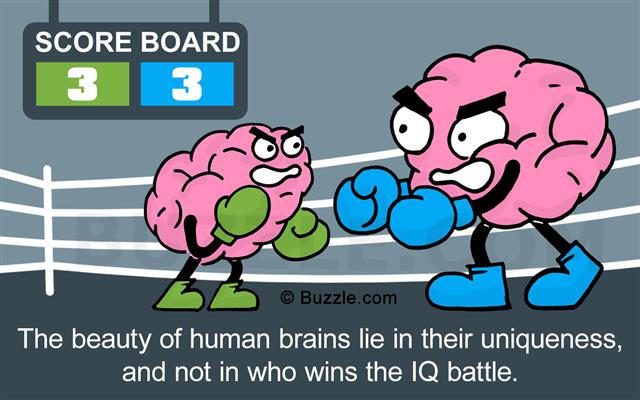 A score above 100 is considered as above average, while a score below 100 is considered as a below average. An IQ score much below 50 or above 150 is usually not noticed. Studies show that the IQ of half of the population is between 90 and 110, while 25% have higher IQ’s, and 25% have lower IQ’s. Einstein is considered the ‘only’ man to have an IQ of about 160. Mensa is a society for people with higher IQ, people in the top 2% (1 in 50).

Interpretation of IQ score is helpful in measuring certain aspects of intelligence. It reflects the level of performance of a person on a set of tasks. But it cannot be the 100% correct. It should only be considered as a guideline. You cannot judge the correct value of a person from his IQ. The younger the child is, the less reliable the score.

You may compare the IQ of a person with average IQ scores of other persons from the same category. However, it is not closely linked with some important qualities of the person, such as career achievement and happiness. Along with one’s intelligence quotient, their emotional intelligence should also be taken into consideration. An IQ score scale is the same for everyone, regardless of age. For example, the average IQ for a 13 year old is also 100.

Severity of mental retardation can be divided into 4 levels:

It has been observed that the average IQ score of occupational groups is almost the same.

IQ can also be expressed in percentiles which is quite different from the percentage scores. Percentage is concerned with the number of items, correctly answered by a child, compared to the total number of items. But percentile means the number of other test takers score that an individual’s score equals or exceeds.

Being intelligent does not mean being knowledgeable. IQ score is just a rough measure of academic intelligence. An IQ not as high as hoped, should not be considered as an alarming situation. No one should be discouraged on this basis. There are many elements besides IQ which contribute to one’s success.