Why Do People Lie? The Answers May Really Surprise You

Lying can be broadly classified into 25 different types; the common ones being, bluffing, exaggeration, jocose lie, polite lie, perjury, white lie, lying-in-trade, noble lie, etc. Researchers have spent a lot of time trying to solve the mystery and reasons for lying.

Home / Uncategorized / Why Do People Lie? The Answers May Really Surprise You

Lying can be broadly classified into 25 different types; the common ones being, bluffing, exaggeration, jocose lie, polite lie, perjury, white lie, lying-in-trade, noble lie, etc. Researchers have spent a lot of time trying to solve the mystery and reasons for lying. 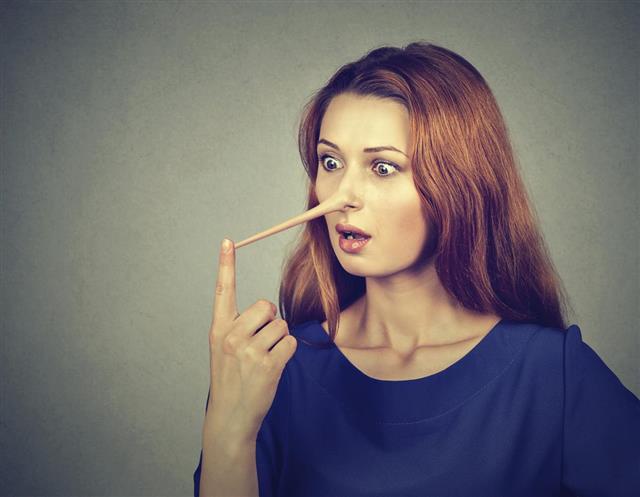 Lying is morally wrong and is always discouraged. But, unfortunately it is quite commonplace and comes naturally to human beings. It is ironic that deception is considered ‘fair in love and war’. But, lying or deception always has serious consequences. As mentioned above, there are different types of lies, viz., a white lie, fabrication, a noble lie, a lie-to-children, etc. There are various reasons why people lie; fear being one of the most prominent ones.

Apart from fear, escaping punishment is also an obvious reason why people lie. When a person is aware that he will be punished for his deed, he tends to lie. It is a natural reflexive human reaction to distance oneself from wrongdoings or faults. This is commonly found in children in order to get out of trouble.

Another common reason why people indulge in lying is to improve their image or save face. They constantly wish to portray themselves as good, polite, successful, etc., in short, possessing all positive human qualities. Exaggeration and bluffing are two other types of lies, and methods adopted by people to impress or mislead others.

Though we all know that relationships are based on trust and truthfulness, lovers usually lie to each other or keep secrets. Misleading someone in love is an unforgivable crime; as, when found out, it can lead to distrust, misgivings and a broken relationship. Cheating on your partner by lying is a harmful way of deception. People lie in relationships to continue the goodwill and also to impress the partner. There may also be other harmful motives for deception.

Telling a lie as a joke or to fool someone is a harmless type of lie, also known as a jocose lie. Passing on information without complete knowledge is known as gossiping; but, it is also a form of lying. Sometimes, people do not want to accept the fact that they do not know the truth, and hence, they lie. This is known as ‘fabrication’.

People lie in society to look agreeable, to maintain good relations and to avoid disagreement with others. These lies are known as ‘white lies’. People tend to lie more when in company. In such a situation, there is no difference between a man lying or a woman lying. People lie in order to protect privacy about oneself as well as others and also to maintain self-worth and self-esteem. Lying is not considered harmful and deceptive if someone lies to refrain from hurting others’ feelings.

‘Lying by omission’ is, nowadays, considered a part and parcel of business, when a salesman purposefully creates a misconception by omitting certain facts. In business, one may need to lie in order to maintain good relations or even to sell products. Lying for a deceptive gain is considered a harmful type of lying. On the other hand, a doctor not telling the truth about his patients’ health to avoid affright among his family; or a policeman lying in order to avoid panic is a noble lie.

Some people also suffer from a disorder known as compulsive lying (Mendacity is the word used to describe an inclination to lying). These people, known as chronic liars, acquire a habit of lying and tend to lie in any and every situation. Lying comes naturally to them and they find it almost difficult to tell the truth. Compulsive lying is a disorder that develops from early adolescence. One must keep an eye out for signs of compulsive lying.

It should also be noted that chronic liars mean no harm and most of the time they do it unintentionally. Compulsive lying results in broken relationships at every level. Compulsive lying can also be an underlying symptom of some other serious disorder and one has to be treated as soon as possible.

How to Stop Lying?

➡ One of the common reasons for lying is lack of self-confidence. The person may be lying to present a good image in society and acceptance of others. Building confidence through self motivation and other inspirational methods can be one of the helpful ways to stop compulsive lying.

➡ Explaining the person consequences of lying effectively is another helpful method that can be used. It is more applicable in case of children and teenagers.

➡ Compulsive lying is a disorder that needs to be handled sensitively. The person suffering from it must first accept that he is at fault and needs help to get over it. Self-hypnosis and counseling are some of the effective methods to stop compulsive lying.

➡ Last, but not the least, you need to make the person understand that confessing and apologizing, although seemingly difficult, is an effective way of getting over lying and re-building your image and self-respect.

If you find a near and dear one lying frequently, you can try to understand the underlying cause for it. You can help the person before it becomes habitual for him/ her and leads to serious consequences. Take care!