The White Knight Syndrome is a characteristic that is shared by many people. It is the compulsive need to rescue someone, especially a potential life partner. There are four subtypes of this syndrome. 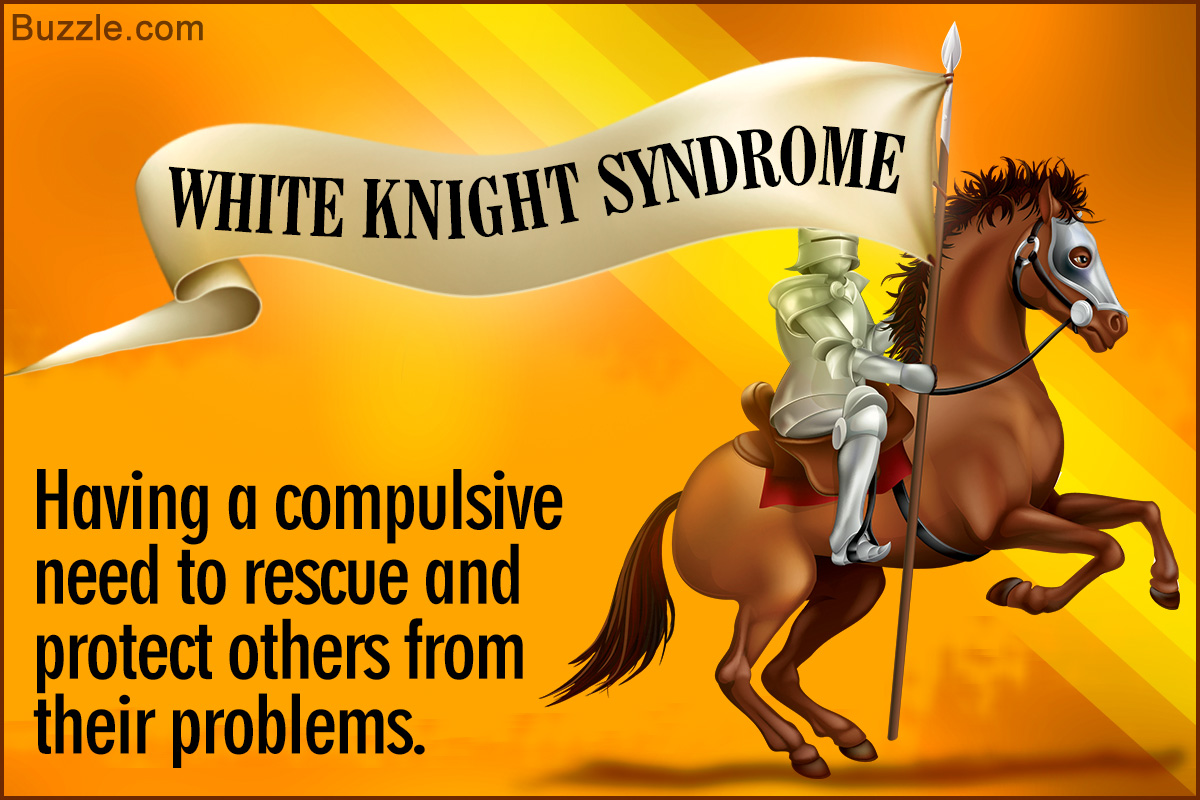 The White Knight Syndrome is a characteristic that is shared by many people. It is the compulsive need to rescue someone, especially a potential life partner. There are four subtypes of this syndrome.

A glimpse into the mindset of a white knight …

The White Knight Syndrome is also called the Hero Syndrome. People having this syndrome usually identify themselves as rescuers. Most often, when people come across this syndrome, they always think it to be something negative, like a disease, disorder, or an ailment. But, it is not so. This syndrome is very common with ‘nice guys’, and it is usually pertaining to their love life. Surprisingly, many women also have this syndrome. It is the constant need to look out for women or men who need ‘fixing.’ People, who have this syndrome, get attracted to those who constantly appear to be in distress. The form of hardship that the other person is facing can be emotional or physical, and these men see themselves as the knight in shining armor, who have been assigned to save or rescue this person.

People who have this syndrome are the sort who are very caring and emotional. The affections that they have for troubled people are genuine, and such rescuers are always put in the ‘nice guy’ or ‘good girl’ category. They go out of their way to pull the other person out of all the turmoil they are going through, and become the steady factor in their lives. In short, white knights are altruistic in nature, i.e., they are always concerned about the welfare of others. Sometimes, while helping others out of their problems, they tend to become controlling, and may hurt their partners. This trait may be liked initially, but when it starts getting too much, they resent the rescuers, and start thinking about getting out of the relationship.

Men who have the White Knight Syndrome usually develop it due to experiences of their past. Their history may include self-harm, drug abuse, emotional or physical abuse from their parents, loss or threat of losing a parent, any insecurity, etc. Key characteristics to look for if you think that you or your friends and acquaintances have this syndrome are as follows:
» Clingy personality with a fear for emotional aloofness
» Overly emotional, sensitive, and vulnerable
» Gives too much importance to his partner, and expects the same to be reciprocated
» Is very critical of himself
» Tries to blame, manipulate, and control others
» Looks out to find partners who are in trouble, problems (emotional and physical), who have a history of trauma, abuse, addiction, etc.
» Has a fear of being abandoned by his partner
» Is overly keen on offering help, and is forceful and controlling
» Can be easily manipulated by the partner, if he/she exhibits dramatic behavior, and uses sexual favors

Subtypes of the White Knight Syndrome

Given below in this PsycholoGenie elucidation are the main subtypes of this syndrome. It is important to understand that if a person has this syndrome, his behavior can be classified as under, that is, he may or may not be associated with one subtype alone. This change from one subtype to another occurs when the person gains a different perspective, goes through a new experience, or has a significant alteration in his life.

The main discerning characteristic of an overly emphatic white knight is the fear of emotional distance and neglect from his/her partner. They are the types who are always trying to maintain an emotional connection with their partners, by giving them whatever they want in the form of affection, love, care, etc. They are constantly worried about their partner’s well-being, especially when the partner is not physically around. They feel that they are the responsible ones in the relationship, and sometimes do things for their partners which may seem controlling.

For example: ‘A’, an overly emphatic white knight, is in a relationship with a person who is not organized in his work, and has no time management skills. In such a scenario, ‘A’ will go out of his way to make a schedule for his partner, and will try to make his partner follow the schedule. If the partner follows it, then ‘A’ feels elated and needed, but if his partner does not follow it, ‘A’ feels dejected, rejected, hurt, or absolutely furious. He starts thinking that his partner is not happy with him, and tries to do more things just to please her.

The tarnished white knight is somewhat like a narcissist by nature. He loves the feeling of being loved and needed, and he actually feels potent and powerful when he receives affection. Such persons usually choose partners who come with a lot of baggage. They thrive for drama, and usually get involved with people who they know will cause lots of disparity in the relationship, in the future. They are the ones who most likely end up cheating on their partner, so that they feel important in the relationship. They are low on self-confidence due to some incident that has transpired in their past, and hence, try to put the blame on others for all their shortcomings. Tarnished white knights are a little tough to understand, so I shall let the example below explain the inner workings of a tarnished knight’s mind.

For example:,’B’ meets ‘C’ and learns that she has had an injury. He asks her out and they start dating. He is a very doting and caring boyfriend, and helps her out during her injury. After she recovers, he starts popping in at her work to see how she is faring, and this becomes too much for her to handle. She starts feeling suffocated, as his nature became too controlling. He starts becoming overly critical about her and her work, and makes uncomplimentary comments about how she works. As the days pass, ‘C’ becomes tired of his demeanor, and goes to meet ‘B’ so that she could call it off with him. When she reaches his house, she finds him in the arms of another woman. On confrontation, ‘B’ justifies his actions by blaming ‘C’ for not giving him any credit and making him feel unimportant.

Balanced white knights are like the perfect spouse, companion, and friend a person can ask for. They are genuinely helpful, and are happy when their partner is successful. They hardly feel jealous or conflicted when their partner is more successful than them. A balanced white knight, like the name suggests, is a person who has a balanced outlook towards life. Such people face even the worst of the situations in the bravest way possible, and always try to find the bright side to everything. They have a strong willpower, which they exhibit in many situations. They are not afraid of changing themselves to make their partners happy. Balanced white knights are those who do not succumb to the trauma that they experience, but emerge as stronger, and balanced human beings.

For example: ‘D’ is a woman who has suffered the loss of a parent at a young age. Later on, during her teens, she lost her other parent. For a while, she went on a path of self-destruction by binge drinking. In due course, she realized that what she was doing is wrong, and put a stop to it. She did not let her past ruin her present and future, and thus, she chose the path of self-reform. ‘D’ found a nice man and got married to him. He was her best friend, lover, and husband, and she supported him through thick and thin.

Such white knights go through traumatic experiences, like physical, emotional, and sexual abuse, in the early days of their childhood, due to which they have this overly shameful and insecure feeling about themselves. Due to this traumatic childhood, they are not very good at dealing with their emotions, and thus, turn into an oppressor. They manipulate their parents, friends, teachers, etc., as a way of dealing with their traumatic childhood. When they grow up and get involved in a romantic relationship, they create scenarios for their partner, where he/she starts to feel ashamed or scared. They take out all their anger and frustration on their partner by making them feel guilty, ashamed, insecure, and scared. They get emotional gratification when they see others in misery.

Terrorized/terrorizing white knights have anger issues and have a tendency to get violent with their partners. Their deep-rooted sense of shame, which was developed due to their disturbing childhood, makes them violent and vociferous. So, how are they helpful? They seek out people who have had some trauma in their childhood, and try to help them become confident and optimistic. Once they achieve this, they become demanding and start to control the life of their partner. If the partner puts up resistance, they tend to act out by being emotionally and physically abusive.

People with White Knight Syndrome try to cope with it by internalizing or externalizing their feelings of shame, insecurity, inadequacy, guilt, etc. When they internalize their feelings, they keep everything bottled up inside, and tend to start harming themselves. Externalizing feelings means taking out all the frustration and anger on others. Both tendencies of dealing with the stress of their emotions are not good, as they do more damage than good. Talking to a psychiatrist and taking therapy is the best possible way of coping with this syndrome.