What is Superficial Charm? The Answer Will Astound You

While reading through the pages of novels, have you ever come across a character with magnetic charm but with little regard for the feelings of others? This is what is known as superficial charm and such people exist in real life too. They use their charm to entrap people and falling for their charm can be disastrous. Read on to know more...

Home / Uncategorized / What is Superficial Charm? The Answer Will Astound You 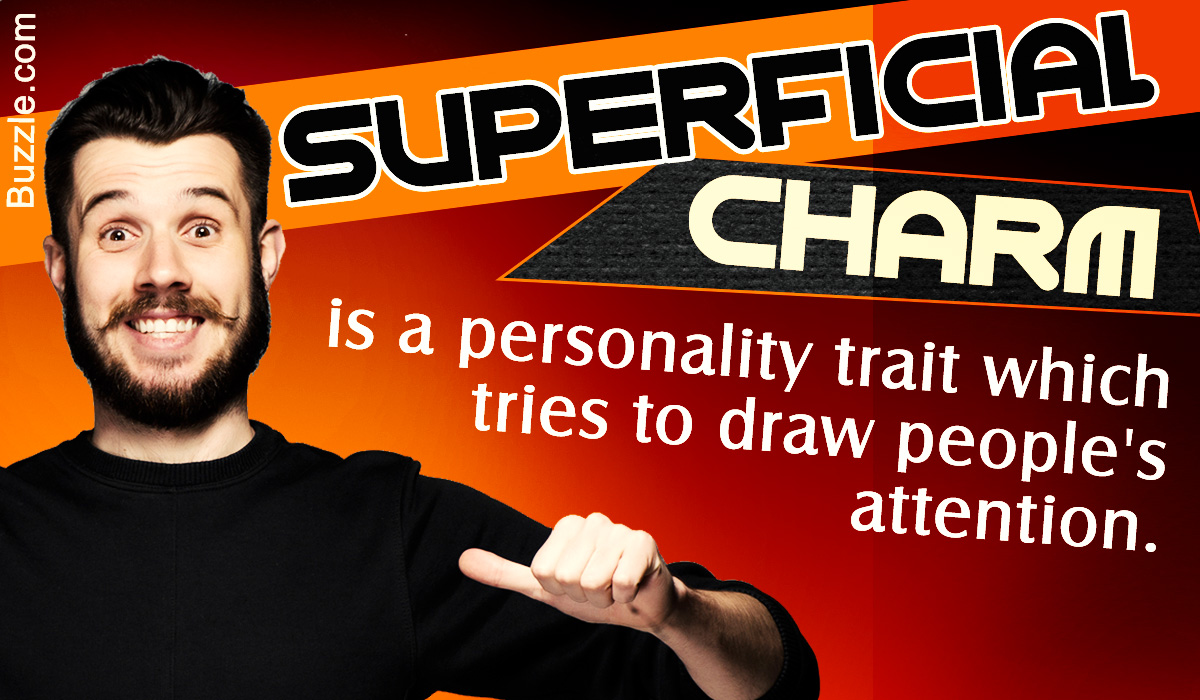 While reading through the pages of novels, have you ever come across a character with magnetic charm but with little regard for the feelings of others? This is what is known as superficial charm and such people exist in real life too. They use their charm to entrap people and falling for their charm can be disastrous. Read on to know more…

Superficial charm is the ability to seem irresistibly charming, especially to the opposite sex, and the tendency to use smooth words and glib talk. It is a personality trait that is mostly associated with sociopath, psychopathy and other similar personality disorders. People with superficial charm have a narrow mind and when you come across a person exhibiting the trait, your first impression about the person would be that he/she is extremely sober and well-mannered. In fact, such people might even go out of their way to please you. But beware, for they are not what they appear to be and this is the reason they are often called social chameleons. However, every person who appears nice to you is not likely to be exhibiting superficial charm. So, how do you know if the person you are interacting with, is genuinely well-mannered or a sociopath looking for a “victim”? To find out, we need to delve deeper into the psyche of a sociopath and try to understand this kind of behavior.

Who is a Sociopath?

We live in a civilized society which demands that we follow certain norms when it comes to our behavior and actions. This means that we cannot go by our impulses and do whatever we want, wherever we want to. There are rules, both written and unwritten, that determine how we behave at every moment in our day-to-day life. For example, there are traffic rules that tell us how to drive and rules on how to conduct ourselves at the workplace. We know that if we fail to abide by these rules, we are bound to face the consequences. But can you imagine a person with no regards for these rules and who is happy to go against the law, even to the extent of hurting or causing harm to others? Would you consider him normal? Well of course not. Such anti-social tendencies are characteristics of a sociopath.

A sociopath is a term used to refer to people with a mental disorder known as antisocial personality disorder (APD). People with this disorder have difficulty in adhering to the norms of society, and they tend to break the “rules”. Such an individual is unable to relate to others and hence can hardly empathize with the feelings of other people around him. He finds pleasure in indulging in activities that are against the law and does not think twice before indulging in glib talk to manipulate others. The thought process of a sociopath is also deemed as abnormal, for he thinks in a manner that is poles apart from that of a normal individual. Due to this strange behavioral pattern, it is almost impossible for a sociopath to be successful at work or in relationships. What is of utmost importance to a sociopath is to get things done as he wishes them to, even if it means he has to deceive others. Sociopaths are people with no conscience.

Sociopaths are emotionally shallow which means that they don’t have feelings for other people around them. The sole reason they get into a relationship is to prove to themselves that they are capable of being loved. Although you may initially have a good impression of such an individual but with time, as you get to know him better, you’ll come to know that he is far from what he seems to be, and in reality, is a very different person. So, the next time you come across an individual with a seemingly fascinating personality, make sure he is not wearing a mask of superficial charm, before you form a positive impression of him in your mind!