Your Guide to Understanding the Reality Principle in Psychology

Have you ever felt the urge to eat a lot when on a diet? You surely must have. But then, you must have curbed these urges in order to achieve a long-term fitness goal. The urge, here, is the pleasure principle, and the thought of a long-term benefit is the reality principle.

Home / Uncategorized / Your Guide to Understanding the Reality Principle in Psychology 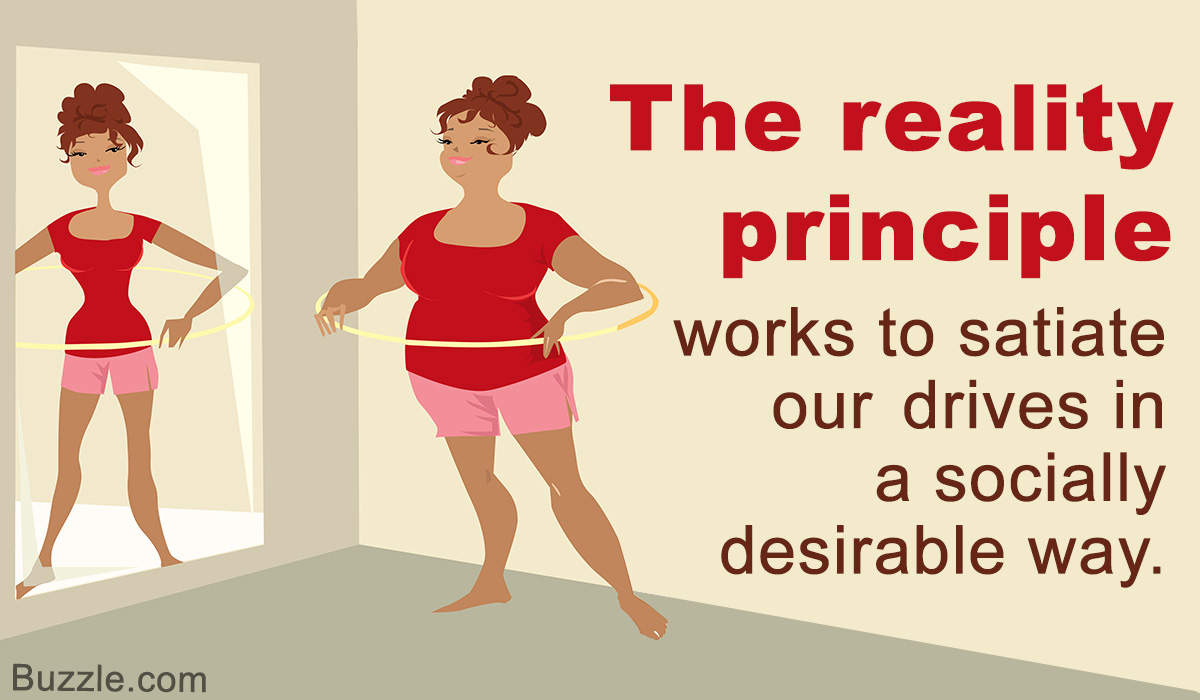 Have you ever felt the urge to eat a lot when on a diet? You surely must have. But then, you must have curbed these urges in order to achieve a long-term fitness goal. The urge, here, is the pleasure principle, and the thought of a long-term benefit is the reality principle.

In technical terms, the reality principle refers to the mind’s ability to assess reality of the external world, and act upon it accordingly, as opposed to acting on the pleasure principle.

The reality principle originates from psychoanalysis―a theory postulated by Sigmund Freud that defines the way the human mind functions. Freud, in his theory, theoretically divides the mind into three sections―conscious, subconscious, and unconscious. A simple way to illustrate this is to imagine a huge iceberg with a small portion protruding above the water, and the rest underneath. The tip is the conscious section of the mind, the other two sections are submerged away from conscious realization.

Simply put, all human actions are governed by the mind. But, according to Freud, a majority of our mind functions unconsciously. Therefore, we know (are consciously aware of) very little about the reason behind all our behavior.

Freud further classified the human mind into id, ego, and superego. Each of these work on a different principle, and functions either consciously, subconsciously, or unconsciously. The id is based on the pleasure principle; the meaning of pleasure isn’t limited to gratification of sexual needs, it includes everything that satisfies a biological or psychological need.

The super-ego basically refers to the conscience of a person. The sense of right and wrong, that often leads to feelings of guilt, anxiety, and inferiority. Super-ego is developed by the internalization of cultural rules, and morals, taught originally by parents. The motives of the super-ego always contradict to those of id’s. The super-ego strictly aims to behave in a socially (and culturally) acceptable and correct manner. Whereas, the id simply desires instant gratification of pleasurable needs.

The ego is the area of mind which works on the reality principle. It gratifies the id’s desires, but in more of a socially and morally acceptable manner. Thus, satisfying both id and superego. In most cases, the ego delays instant gratification of id’s desires in order to function effectively in the real world. The ego is made up of perceptual, intellectual, executive, and defensive functions. It is the most hardworking section of the mind, and has to suffice three entities―the id, reality, and superego. Also, it is the most practical portion of our mind, and is the only one in conscious awareness.

Id is like a child, constantly looking to suffice a drive, whereas the super-ego is like a father. The ego has to take care of his child (id), and also has to listen his father (super-ego). The ego has to struggle to bring about harmony among its three severe masters (id, reality, and superego); this leads to realistic (external world), moral (conscience), and neurotic (drives) anxiety.

In case the ego fails to satisfy the super-ego or the demands of the external world, it is punished by the super-ego with feelings of guilt, inferiority, and anxiety. To deal with such punishments, the ego employs certain defense mechanisms. These help cover up threatening impulses, thus overpowering the super-ego, and reducing anxiety.

How it Works in Real Life

The reality principle forces us to consider a situation in the most practical way. It projects risks, requirements, and consequences of various actions or decisions. Let’s take a simple example. Say you are very hungry, you want to have food. The desire to satisfy hunger is basically the id doing its job. You see a food joint, people are eating delicious food. You don’t have money, you can steal, you can borrow some money from a friend, you can withdraw money from the bank. If you steal, you could be caught. You don’t have a penny in your account, so withdrawing is out of question. However, you can borrow some money from your friend, promising him to return it soon. He may or may not lend, but you can surely give it a try. These are all possible options, and the respective outcomes, that your ego would suggest.

If you steal, you can be caught (ego), and stealing is against your morals (super-ego); therefore stealing is a no-no. You can withdraw but, the reality says you do not have money in your account. You can borrow; this option is the safest as it is not wrong morally or realistically. So, you finally end up borrowing money, and eating in order to satiate your id.

In case you stole, and weren’t caught, the super-ego would punish the ego with feelings of guilt. In such a case, the ego would employ certain defense mechanisms in order to suppress the impulses of the super-ego.

A mature personality is characterized by the effective delay in gratification of desires by controlling one’s urges, and behaving in ways that are socially, and morally appropriate. Such a person is believed to have a well-defined ego, leading to a greater sense of responsibility and a strong morale.