Complete Guide on the Framing Effect With its Meaning and Examples

Can our choices be influenced? Yes, because humans suffer from cognitive biases, and we often fall prey to the framing effect. We interpret and react to things differently, the way that they're portrayed to us. 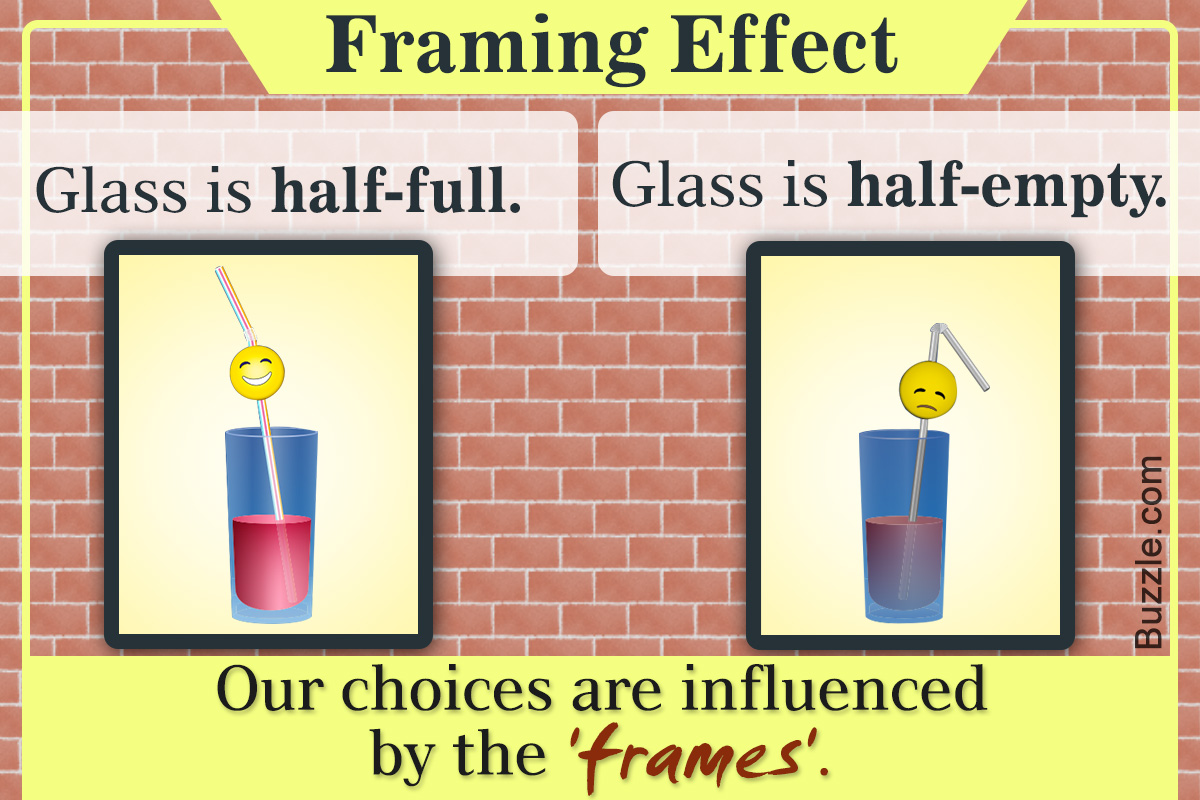 Can our choices be influenced? Yes, because humans suffer from cognitive biases, and we often fall prey to the framing effect. We interpret and react to things differently, the way that they’re portrayed to us.

“The stumbling block isn’t the certainty effect per se. It’s the way that smart people are influenced by mere words, by the way the choices are framed.”
― William Poundstone, Priceless: The Myth of Fair Value

A displeasing event at the start of your day puts you in a negative frame of mind, and makes you feel negative about the whole day. Everything goes wrong that day. Why is it so? Because, you see things through a particular ‘frame’ that day. Hence, any small event which goes against your wish will tend to irk you.

Similarly, the framing effect in psychology is a cognitive bias that humans suffer from. We react unknowingly to things the way they’re conveyed to us. Consider the simple example of a pessimist and an optimist. A glass of water which is either half-full or half-empty: both are equivalent truths. However, when portrayed in a negative frame, you think that the glass is half-empty. If portrayed in a positive frame, you see the glass as half-full. Such ‘frames’ can be used to create marketing gimmicks by advertisers to trick consumers into buying their products. This is cognitive bias that human brains tend to have.

Thus, we see things the way they are portrayed or framed to us. Let’s go through a few examples of this ‘framing effect’.

Examples of the Framing Effect

A city of 600 people is likely to be attacked by a deadly disease, that might result in the deaths of its inhabitants. You’ve been asked to select a strategy out of these that will help the city combat the epidemic.

A careful observation will indicate that programs ‘A’ and ‘C’, and ‘B’ and ‘D’ are the same. However, most people chose program ‘A’ and ‘D’ respectively, only because they have been portrayed differently.

In advertising, visuals and words are manipulated to give a positive effect.

Positive Frame
The product has been proven effective in 80% cases.

Negative Frame
The product has failed to work on 2 out of every 10 cases.

In case of positive framing, you immediately feel positive about the product, and get enticed to buy it. If the same thing is portrayed negatively, stressing on its failure chances, you might not tend to buy this product.

There are many other marketing strategies that can be applied for the case of advertising. For example, instead of displaying the total cost of the product, the advertiser may display the break-up of costs, making it appear less expensive, though the total cost is the same.

In the field of behavioral economics, this holds a very important position. Again, consider a simple example. You’re contemplating over the decision of investing in stocks of Company X. You’ll ask its current investors, and different investors portray the same information differently.

Positive Frame
There is a 75% possibility that investment in stocks of Company X will turn profitable.

Negative Frame
Investment in Company X has turned out to be loss-making 25% of the times.

Thus, if the investments of the company are positively framed, the potential investor will prefer to buy them, but will react differently if negative information is furnished to him, thereby avoiding investing in Company X.

Media is very effective in using framing techniques to divert or grab the attention of viewers. One of the examples that can be mentioned is the change of the word ‘global warming’ to ‘climate change’. It has been stated that such a change was made for political reasons, since apparently, the word ‘climate change’ is less scary than its counterpart. Of course. scientifically, the meaning of both the terms is different. However, such a speculation in the media certainly created different ‘frames’ towards the approach of this sensitive issue.

During the elections, politicians may emphasize on the positive developments carried out by them to attract more votes. They may try to malign the opposing party, to put the opposition in a negative frame in the minds of the citizens.

You can help yourselves from falling prey to such tactics by being vigilant before making any decision. To think rationally, we need to overcome our cognitive biases. Though it is very difficult to do so, as consumers, we should be aware and not fall for advertisements that ‘frame’ our mind. You might be enticed to invest in a particular scheme that boasts about high returns, yet puts its terms and conditions in small letters. A very clever tactic used: boasting about the roses and undermining the thorns in it. As consumers and citizens, we should try to think ‘out-of-the-frame’!