A General Overview of the Common Traits of an ESTP Personality

ESTP is one of the personality types as classified under the MBTI assessment. People belonging to this type are funny, charming, and outgoing who will keep you entertained throughout. 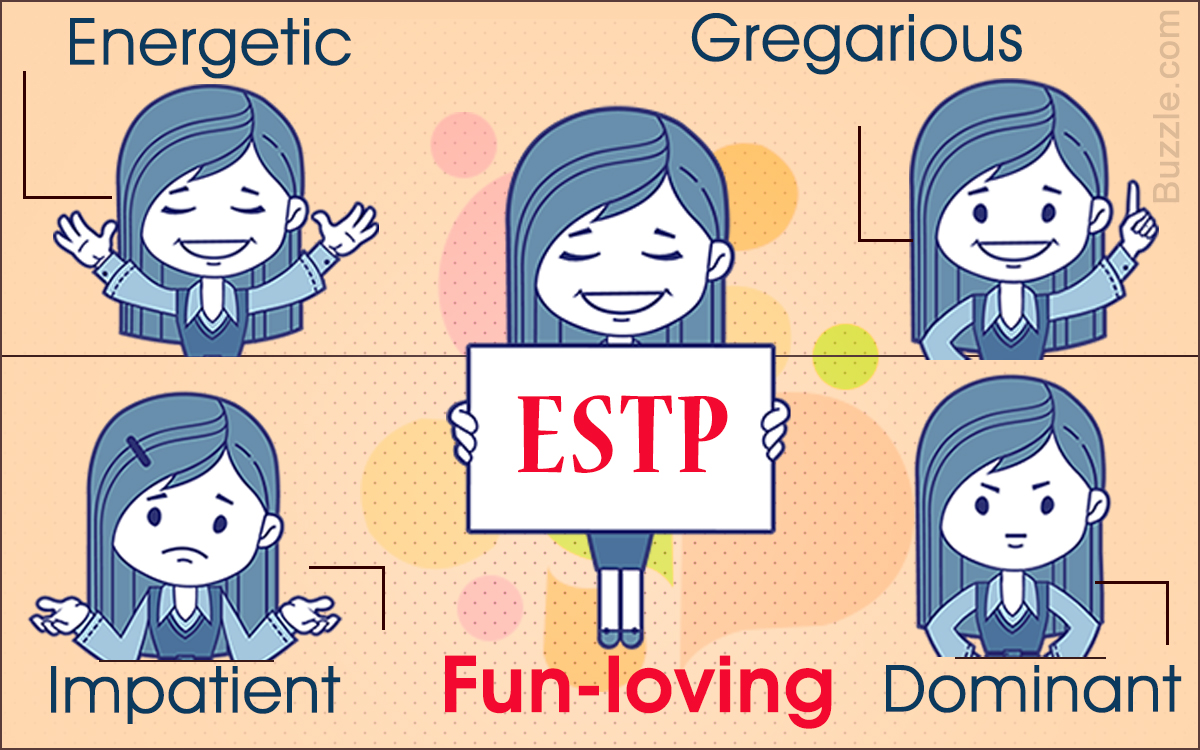 ESTP is one of the personality types as classified under the MBTI assessment. People belonging to this type are funny, charming, and outgoing who will keep you entertained throughout.

According to personality trait measures and cognitive functions, ESTPs score as Dominant, Flexible, Demanding, and Sociable.

Each and every one of us in this world exhibit certain type of behavior that defines our personality. Some people are quiet and sober, while others are talkative and outgoing. Some like to keep to themselves, while some feel good with many people around. There are different kinds of people having few positive as well as negative traits. Knowing yourself helps you through the important and toughest decisions of life. For this reason, Myers-Briggs Type Indicator (MBTI) was created that classified people into 16 personalities according to their behavior and traits.

First, let us get started with the MBTI analysis that categorizes people into four main areas:

One of those 16 personality types is the ESTP. ESTPs are called “the doers” or “the Persuaders” rightly so, as they are action-oriented, outgoing, and highly-adaptable people. According to the psychologist, David Keirsey, who created the Keirsey Temperament Sorter, about 4-10% of the total population in the world are ESTPs. In the following sections, we shall discuss the characteristics, strengths, and weaknesses of the ESTP personality type.

ESTPs are extroverts. They are outgoing, sociable, and fun-loving people. They love spending time with friends and love being the center of attention. They have endless energy.

ESTPs are live-in-the-moment and dive-in-the-action kind of people. They focus on small things rather than looking at a broader view.

ESTPs are logical, practical, and realistic thinkers. They value the objective and logic more than the social norms and feelings of others while taking decisions.

ESTPs like a flexible lifestyle rather than a planned and organized one. They are adaptable and like to keep their options open. They are very spontaneous and do not like to stress themselves with planning.

They are particularly focused on the present moment rather than thinking about the future. They prefer to see tangible results and focus less on future. They are happy in their environment and have good problem-solving skills. They are excellent people to get advice from whenever you need to decide anything in emergency or quickly. So, next time you want a quick advice or want to get something done quickly, you know whom to ask!

ESTPs are full of life and energy. They love being around people and interacting with them. The best way to recognize them would be to look around for the people who jump around from group to group at a party or a gathering, usually laughing and entertaining others with their good sense of humor. They bring a certain energy to their interactions with other people. They are active and playful, and prefer to keep things fast-paced rather than keeping them serious. They are particularly good at motivating and influencing other people.

They are very adaptable to change because of their fun-loving nature. They exactly know how to put their chirpiness and sociable nature to maximum use for getting things done. They have great interpersonal skills and are observant people with strong eye and memory for details.

ESTPs love to experiment and are generally open to new experiences. They prefer letting their work speak more than talking. They enjoy putting their skills to test and love challenges. They take and put things in a different perspective all together. They are typical thrill seekers and ‘adrenaline junkies’ who may be found enjoying all the extreme and exotic sports like skydiving, motorcycle racing, scuba diving, etc.

They have an uncanny ability to understand thoughts and motives of other people. They are extremely perceptive and can detect changes in a person very quickly, be it their behavior, expression, attitude, or even clothing.

They come as direct and straight-forward people who prefer communicating clearly rather than beating around the bush. However, this may sometimes come off as rude and blunt behavior towards others.

Since the ESTPs are full of life and energy, and always seek fun, they can get bored very easily. They often find theoretical discussions to be boring and pointless. They learn the best through practical approach. They may even get bored to an extent of abandoning relationships quickly.

Since they are not iNtuitive people, it is their least developed trait. Their quest to get things done quickly often leads them to being impatient. They do not trust their own instincts and sometimes may even be suspicious of other people’s intuition. They move at their own pace and do things in a way that keeps themselves excited. They don’t like focusing on one detail for a long time. They are impulsive in nature and use this trait to overcome any obstacle in their way.

Their straight-forward nature may come off as blunt and rude, and can hurt someone’s feelings or emotions. They do or do not realize the effect their words may have on others. Since they are practical and rational, they see feelings as secondary after facts and reality. It’s not that they do not care about other people, but their decision-making capability doesn’t take others’ feelings into account.

Although they are straight forward, they often experience a lot of problem in acknowledging and expressing their own feelings. They might even get dramatic at times. Even though they can sense the changes in others’ behavior, they can’t recognize their own.

Their impatience can lead them to take risks in life without thinking about the long-term repercussions. It may also happen that they take a risky step ahead just to combat boredom. However, this sometimes may even help in their favor too. They prefer improvising quickly in case of a problem rather than spending time in planning.

ESTPs may seem bossy and dominant at times. They are the people that you can box in. They don’t like being lectured for hours or ruled by deadlines. They are action-oriented and want quick results. School and entry-level work can be really intolerable for them as they don’t like concentrating on single thing for a long time.

So, this was all about ESTPs. They are fun to be around and are great at finding new things to explore. By now you must be thinking and feeling a bit creepy as to how do we know so much about you, right? No, we are not any secret agents to be spying on you!

Some of you might identify with the traits given above, while others might not. It is completely a matter of choice. These were the general traits of an ESTP that may serve as guidelines for you to analyze yourself. After all, you know yourself better than others do. So, get to know yourself, work on your weaknesses, and live your life to the fullest!