A Brief Overview and Comparison of Holism and Reductionism

Holism and reductionism are two philosophical concepts regarding the analysis of any system. PsycholoGenie attempts to present a brief overview and comparison of these philosophies.

Home / Uncategorized / A Brief Overview and Comparison of Holism and Reductionism 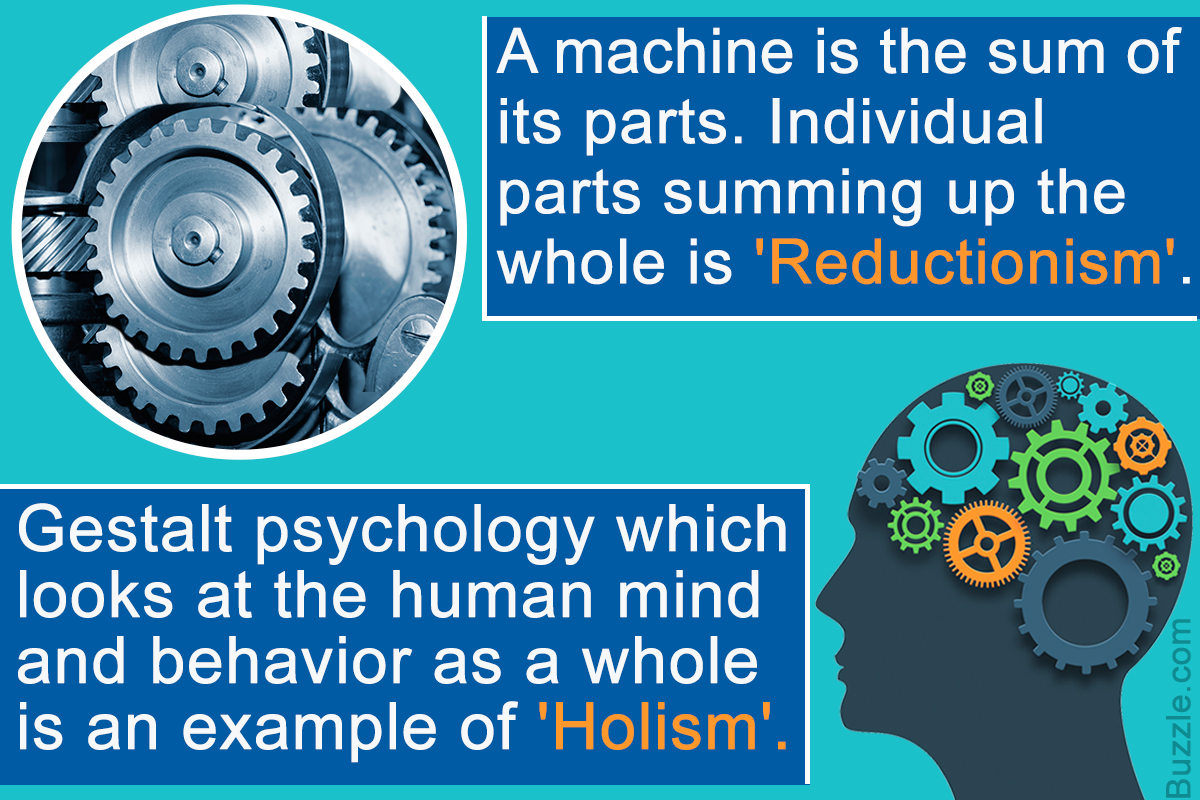 Holism and reductionism are two philosophical concepts regarding the analysis of any system. PsycholoGenie attempts to present a brief overview and comparison of these philosophies.

Origin of the Two Theories

The origin of Reductionism dates back to the 1600s when Descartes and Newton used Aristotle’s Laws of Thought to explain their theories. In contrast, Holism as a term was first used by South African statesman Jan Smuts, in 1926, in his book ‘Holism and Evolution’.

‘Holism’ is a philosophical doctrine that advocates the view that any natural system or entity should be viewed as a whole or in its entirety and not as a sum of its component parts. A simple example of holism can be the way the health of an individual is judged. A person is said to be healthy if his overall well-being is healthy and not just his/her individual body organs.

On the other hand, ‘reductionism’ is the complement of holism, it believes that a system or entity is the sum of its parts or components, and understanding the basic components or parts can give us an understanding of the entire system. Here, again, this concept can be better understood with an analogy. A lumped electrical circuit consisting of separable elements like a resistance, capacitance, and inductance can be analyzed as a sum of its individual parts. Let us take a closer look at the meaning, examples, and comparison of these two theories.

The term is derived from the Greek word ‘holos’ meaning all, whole or entire. It was introduced by Jan Smuts, an African Statesman, in his book ‘Holism and Evolution’ (1926). He defined it as “the tendency in nature to form wholes that are greater than sum of the parts through creative evolution.” In philosophy, any doctrine that prioritizes the whole over its parts, is holism.

Confirmation holism was a theory put forth by the American philosopher Quine. It states that no individual statement is subject to an empirical test, but only to a set of statements (whole theory).

Functionalism in philosophy is based on holism. Semantic holism states that words can be understood semantically only by referring to the language they belong to. Following are some generic examples of holism.

● When Martin Luther King said that ” Injustice anywhere is a threat to justice everywhere.”, he had a holistic view of social justice.

● As mentioned above, functionalism states that a mental state may be identified only in terms of its relation with others, which is pertaining to the whole, as opposed to its internal constituents.

● Another example of holism is Cellular automata. Its behavior is simple in most cases, but highly unpredictable on rare occasions.

● Gestalt psychology is an example of holistic approach because it looks at the human mind and behavior as a whole.

● Macrosociology which studies society as a whole rather than just a collection of individuals, is based on holism.

● An all-inclusive design perspective adopted by an architect makes architecture a holistic profession.

It is a doctrine which states that a system, phenomenon, or theory can be explained as the sum of its individual parts. The view that laws of chemistry are based on physics is reductionist. Explaining one theory with the laws of another, more generalized theory is known as ‘Theoretical Reductionism’.

Following are some examples of a reductionist approach.

● The claim that all sciences are reducible to physics is reductionist.

● A machine is the sum of its individual parts. Individual parts functioning independently sum up the whole. This is a prime example of reductionism.

● Structuralism and Behaviorism in psychology are examples of reductionism. Structuralism treats the adult mind as a sum total of experience from birth to the present. Behaviorism is an analysis of elements that define human behavior.

● Henry Ford’s ‘Assembly Line’ for automobile production is based on reductionism as the entire production of a car was considered as an assembly of its component parts.

● Emotions like anger or sarcasm cannot be understood by studying the individual body parts. They can only be studied as a whole; with a holistic point of view.

● ‘Turbulence’, a phenomenon studied in fluid dynamics involving the irregular motion of air, cannot be explained by scientific reductionism.

This was a brief discourse on the two philosophical approaches to any theory, system or phenomenon. It can be seen that they are not mutually exclusive, as the study of individual parts and that of the whole is supplementary.