Every one of us has heard of instances where someone was in an emergency, and even though there were other people present, no one bothered to help the helpless victim. This strange phenomenon is known as the bystander effect. 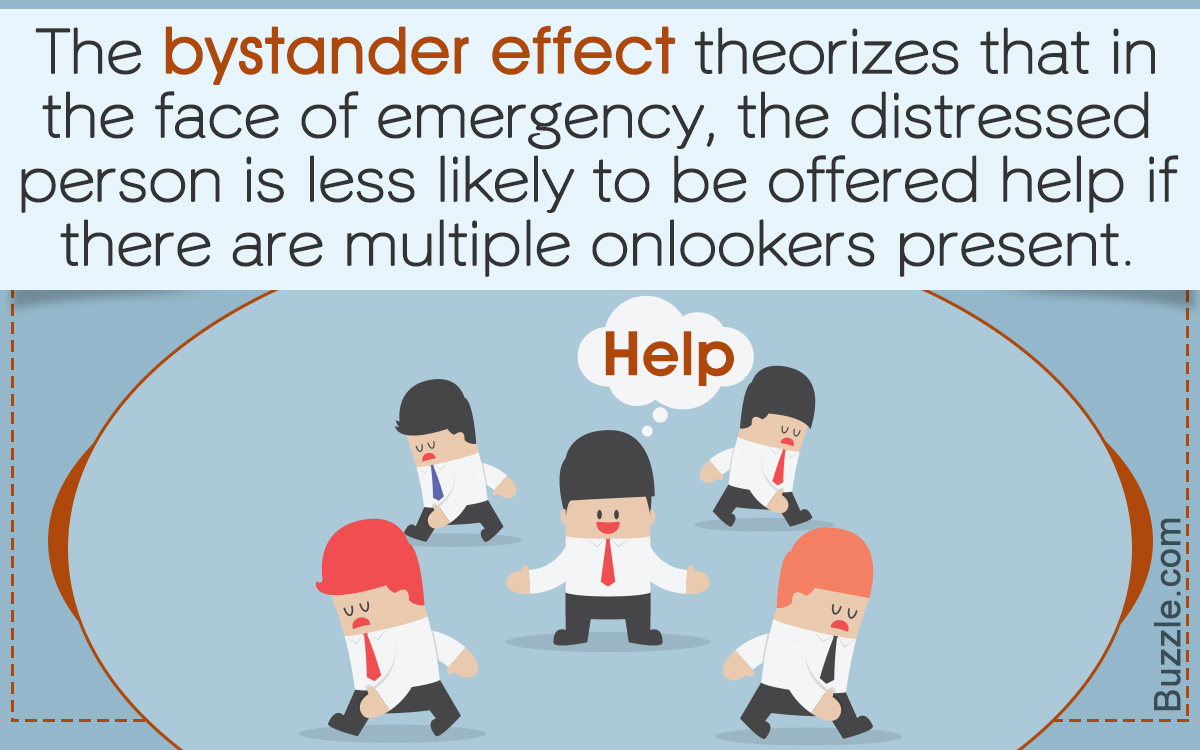 Every one of us has heard of instances where someone was in an emergency, and even though there were other people present, no one bothered to help the helpless victim. This strange phenomenon is known as the bystander effect.

“There is no exercise better for the heart than reaching down and lifting people up.” ― John Holmes

The circumstances under which Kitty Genovese was murdered on 13 March 1964, has been extensively cited as a suitable example of ‘bystander effect’. Genovese was stabbed to death at around 3:15 a.m while on her way back from work to her apartment in Queens, New York. She was stabbed by serial rapist Winston Moseley, who fled the crime scene after one of the neighbors shouted at him to leave her alone. However, the assailant returned after ten minutes, stabbed the victim many times over, raped her, and left her for dead. Even though she screamed for help, her neighbors did not come to her rescue.

Thus, also known as the Genovese syndrome, the bystander effect is a psychological phenomenon that theorizes that the greater the number of bystanders present, the lesser is the likelihood of any of them coming forth to rescue the person in distress. The term was coined by psychologists John Darley and Bibb Latané in 1968, after they conducted a series of non-dangerous or violent emergency-based experiments to find out why the witnesses in the Kitty Genovese murder did not help her.

The first reason put forth by psychologists was that no single individual feels the absolute pressure to intervene when the responsibility for intervention is shared among multiple observers, and thus, no one takes the initiative to offer help to the distressed person. However, when there is only one onlooker, he/she is more likely to help the person in distress because of his/her individualistic pressure to intervene. However, the individual bystander may also choose to ignore and not offer help, if his/her personal security is threatened or if he/she does not wish to get unnecessarily involved in the situation.

The second consideration submitted by the duo was that, even though a bystander cannot closely observe the other bystanders, on seeing multiple bystanders, he may assume that the emergency is being resolved by the others, and his own efforts to intervene would be useless, or perhaps cause further confusion or damage. This way, the passive bystander justifies his inaction by assuring himself that others are there to intervene and help the individual in distress.

Experiment 1
This was one of the first ever experiments conducted to determine whether the presence of other people near the distressed person inhibited the bystanders from intervening to offer assistance. A bunch of college students (subjects) were made to sit in a cubicle and instructed to speak to fellow students using an intercom. The students were also instructed that only one student would be allowed to use the intercom at one time and that they would be speaking either individually, in a pair, or in a group of six. What the student subjects were not told was that there would be only one confederate (assistant to the research) who would be speaking with them. During the conversation with the fellow students, the confederate was instructed to mention that he had suffered episodes of seizure in the past. The confederate then pretended that he was having a seizure attack during the conversation and screamed for help from the fellow students.

The experiment revealed the following results:

These results were attributed to an evident ‘diffusion of responsibility’, wherein the presence of multiple bystanders reduced their sense of personal responsibility to help the distressed person.

Experiment 2
Realistic experiments were conducted by the duo, in order to prove the hypothesis that with the presence of more bystanders in an emergency, the possibility of any one bystander taking the initiative to offer help will not only be less likely but also slow. In one of the experiments conducted to test this hypothesis, the student subjects were assessed under the pretext of filling out a questionnaire. There were three experimental scenarios that were created to test the results.

The premise of the experiment was to record how the subjects would react in the face of an emergency. While the subjects were going through their questionnaire, smoke was filled into the room to make it appear as if there is a possible fire threat. The experiment revealed the following results:

The explanation of only 10% of subjects reporting the smoke in the last experiment, verified that bystanders often get misled by the reactions of others around them. In this case, since the two confederates did not show any traces of fear or panic, most of the subjects controlled their behavior and chose to not react either. This tendency to not react is known as ‘pluralistic ignorance’, wherein the supposed calm reaction of other people is construed as a sign that everything is fine and there is no emergency. These experiments led to the hypothesis that the presence of more people can significantly delay the reaction time of bystanders.

Experiment 3
Another experiment was carried out by psychologists John Darley and Daniel Batson at the Princeton campus, to check the relation between lateness and the bystander effect. A confederate student was asked to feign illness and was seen by the other students. Although the campus students saw the slumped and visibly distressed student groaning, only 10% stopped to show their concern and offer help, even though they were late. However, when not running against time, more than 60% students offered their help to the student in distress.

Variables that Explain the Bystander Effect

Ambiguity: Being unclear as to whether a person requires help or not, can severely affect the reaction of bystanders. Bystanders are also less likely to help if they are unsure about their own well-being and would rarely put themselves at risk.

Similarities: Research based on altruism found that a bystander was more inclined to help the person in distress, if there was something in common between them, such as the same gender, being football fans, and the victim wearing a football jersey.

Familiar Environment: A bystander who is familiar with the locality and knows his way in and around the place, will be more inclined to help the victim because he will feel more secure in doing so.

Diffusion of Responsibility:The presence of multiple bystanders immediately reduced the personal responsibility of the passive bystander. The fact that others can help and the belief that someone else is more qualified to intervene and assist, makes most bystanders withdraw and not participate in helping the victim.

A True Story Based on the Bystander Effect

I, for one, have witnessed this psychological phenomenon and experienced its desensitizing effect on the bystanders present during the episode. Which is why I wished to gain a deeper understanding of this phenomenon.

While waiting to cross the road on a peculiarly hot afternoon, a lady standing besides me, crossed the road a bit too early and was instantly slammed by a motorcyclist. At one moment, she was standing and the next, I saw her rolling on the road from the impact. I did not think, I did not calculate my next move, all I remember doing was running towards her. A huge group of people had surrounded her and were just standing there, shocked and unmoving. No one budged to help the injured woman. I had to shove and push my way through the circle to reach her.

The motorcyclist was there, and he seemed too shocked for words. When I approached her, I noticed that copious amounts of blood was oozing from her ear and that she was barely conscious. I tried to wake her up and checked her breathing, which was barely noticeable. I knew there was no time to call the ambulance, and something had to be done immediately. Someone was kind enough to call for a taxicab, and I somehow managed to pick her up! I was assisted by a man, who also offered to take her to the hospital. I gave him my phone number and instructed him to call me and keep me updated. The motorcyclist accompanied the accident victim to the hospital. The victim’s husband called to inform me that his wife needed to be operated and that the doctors had told him that had she not been brought in so early, she would have probably died. That’s when I realized that had I been a bit late or not offered to help, that woman would not have made it, and that still sends shivers down my spine …

The opposite of a passive bystander is the active bystander, who is naturally tuned to respond to crisis and help people in need. According to Holocaust survivor and sociologist Samuel Oliner, much of this tendency to come forth and help has been attributed to the qualities instilled by the parents of such individuals. The parents of active bystanders were more caring, tolerant, and empathetic towards not only their own children, but everybody, and that quality has inspired their children to do the same.